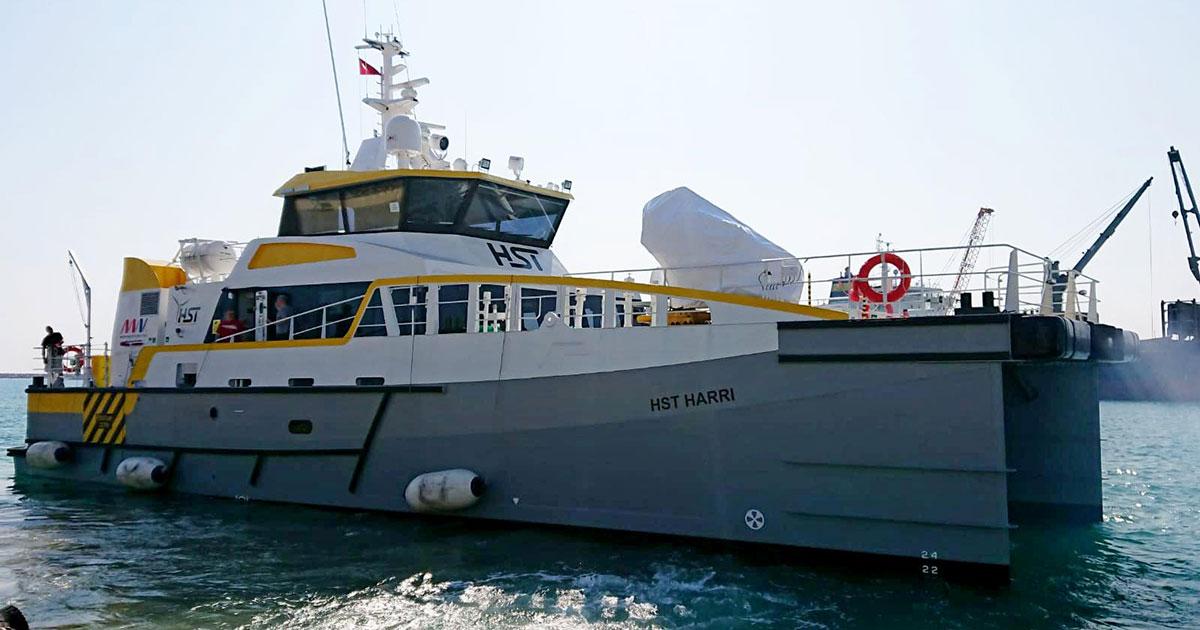 The delivery of the third Fast Crew Supplier (FCS) 2710 bought by Swansea, UK-based High Speed Transfers has taken place at Damen Shipyards Antalya. Named HST Harri, she joins the HST Hudson, delivered in May 2018, and the HST Sofia, which was handed over in March this year. A fourth FCS 2710 for High Speed Transfers, to be named HST Euan, is currently nearing completion for delivery in December.

The HST Harri is booked to start immediately on a five-year contract in the North Sea with wind farm operator MHI Vestas, where her duties will include delivering personnel and equipment to multiple sites.

The FCS 2710 builds on the success of Damen’s highly successful FCS 2610, incorporating all the feedback and experience gained from the operations of its predecessor. While only one meter longer, it is capable of carrying 26 passengers, twice as many as the FCS 2610, and can operate in wave heights of more than two meterss due to an extra meter of freeboard. Additional features include more flexibility, more tank capacity, greater deck space, increased comfort and more accommodation.

Both the Harri and the Euan recently had the pleasure of a visit by the Welsh national rugby team, which was holding a ten-day, hot weather training camp near Antalya. Fourteen members of the squad joined the vessels at the yard and were given a tour of the Harri as she lay alongside the dock.

“We are thrilled to see a third FCS 2710 beginning operations and fourth one just a few months away,” says Arjen van Elk, Damen sales manager for the UK and Ireland. “Tom Nevin and his colleagues at HST have been great ambassadors for the new class and really demonstrated its capabilities and efficiency in both the North and Black seas to the offshore renewable and oil & gas sectors.”

Tom Nevin, CEO of HST, added, “The HST family are delighted to have taken delivery of HST Harri and we look forward to the voyage from Turkey to the North Sea. The FCS 2710 has been well received in the market and we will continue to showcase the vessel and, with it, our company’s capabilities.”