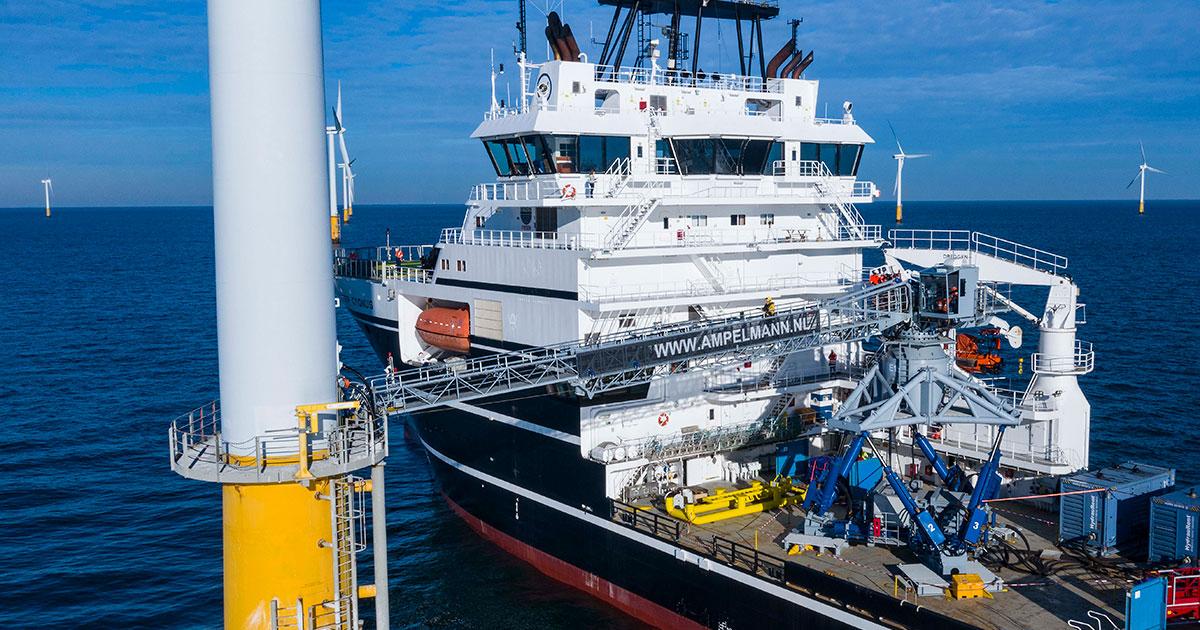 It’s December and it is once again time to look back on the past year, while paving the way into 2020. Ampelmann is revisiting a year of successes, game-changing innovations, and expansion into new territories.

With an outstanding track record and a strong commitment to solving the increasingly specific challenges of its clients, the Dutch company has been working on entering new markets and developing new offshore access solutions. Most recently, Ampelmann announced that it has a new system in the pipeline, the E5000, which will be able to transfer personnel as well as cargo up to five tonnes in rough waters.

“The market was booming the first half year and slowed down in the second half. We saw a strong diversification of operations with steep growth in crane operations in the North Sea where the Oil & Gas (O&G) industry followed the lead of offshore wind to utilize the E1000 system. Also, a larger fleet of L-types operated in Asia, Africa and the Middle East with increasing crew change activities.”

Expanding to new markets and territories

Over the course of 2019, the company worked on growing its presence to territories across the globe, both in terms of new projects and opening new offices. In June, it secured its first Walk to Work (W2W) contract in Norway and working together with DeepOcean, supported the hook-up and commissioning of the Valhall Flank West (VFW) project, operated by Aker BP. The E-type enabled the safe and efficient transfer of key personnel to the normally unmanned installation.

Ampelmann also entered Mexico, not only adding a new country to its portfolio, but also gaining access to an entirely new region. An A-type was mobilized on a floatel and operated for two months, supporting the installation of an O&G platform. Upon completion of the campaign, the system had enabled the safe transfer of more than 9,000 people and by experiencing no technical downtime, it ensured maximum efficiency of operations.

Another first for the company this year was utilizing its proven E1000 system to perform cargo lifts in the O&G industry. After having safely transferred more than eight million kilograms of cargo in offshore wind, Ampelmann expanded this service to O&G, too. In a project for end client Apache North Sea, the E1000 enabled people and cargo transfers to SPM2 and SPM3, two Single Point Mooring platforms a short distance from the Beryl Alpha platform. It supported critical maintenance work on SPM3 and provided significant benefit to Apache during the helideck refurbishment on SPM2.

Earlier in the year, the company also opened an office in Sakhalin, Russia, in a move to expand its presence in the local market.

Among the biggest achievements for the company – an achievement following years of hard work – was reaching a total of 5 million people and 10 million kilograms of cargo safely transferred worldwide in April. This milestone, which has been exceeded since then, is proof of Ampelmann’s commitment to setting the industry standard in offshore safety and efficiency.

Throughout the year, the company secured more contracts across a number of continents. In Nigeria, it got a first project with Horizon Maritime to provide W2W services for a major IOC in the region. The A-type system was mobilized on the Horizon Enabler, a multifunctional offshore support vessel.

On the other side of the world, Ampelmann also secured a contract with marine transportation company Harvey Gulf to perform maintenance work at an O&G platform in the Gulf of Mexico. For this campaign, the A-type was installed on a 10-metre pedestal, making it possible to reach landing locations of 20 meters and higher. The company operated on a 24/7 basis, providing the client with more time flexibility and an extended weather window.

Looking towards 2020, it will be innovation together with sustainable technologies that will lead the way. New markets, regions and projects are on the horizon, too.

“Next year, Ampelmann will set out to reap the fruits of three years of innovation with a new, advanced version of the L-type coming online, the E5000 becoming operational and an electric, light-weight A-type system in the pipeline,” said Van der Tempel. “The focus on bringing emissions down is clear with the new A-type giving a reduction of power of 80%. After close collaboration with a number of clients, we are also launching a data platform that will allow for advanced operational planning. This will enable clients to make informed decisions in their day-to-day work to increase utilization and reduce unnecessary emissions.”