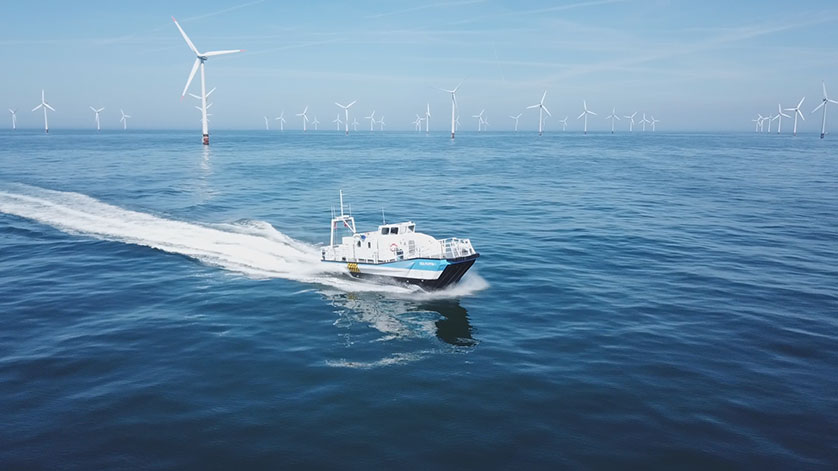 The high-performance, 15-meter long SES daughter craft employs an air cushion for active motion damping, resulting in access capabilities beyond conventional daughter craft vessels, whilst reducing fuel consumption and improving crew and passenger comfort during transit. The compact size also enables vessel deployment using a conventional 15 tonne davit crane fitted onto a mothership. The vessel is designed for launch and recovery operations, however the Sea Puffin will be operated from port during this initial phase of testing and operation.

The Sea Puffin vessel, designed by Norwegian company ESNA, received initial support from the Carbon Trust’s industry-led collaborative research, development and deployment program in 2016. The backing from the OWA successfully de-risked the design to improve its launch and recovery capabilities, as well as ensuring that the vessel’s performance conformed to the operational requirements of the developers. The OWA has continued its support of the Sea Puffin through funding WindPartner to undertake these trials and to help get the vessel built and to market.

Dan Kyle Spearman, Manager of Offshore Wind Access Systems, the Carbon Trust, commented, “The rapid progress of the Sea Puffin from concept to sea trials is another great example of collaborative research and development where industry and innovators are able to partner together to deliver state of the art, relevant vessels for the future of the industry.”

Trygve H Espeland, Naval Architect and co-founder of ESNA added, “The reduction of fuel consumption compared to other daughter craft or crew transfer vessels will help the operators of wind farms to significantly reduce emissions and the environmental footprint of O&M activities for many years to come.”

The sea trials, conducted by the vessel owner WindPartner, will demonstrate that the ‘Sea Puffin 1’ can work in an operational wind farm environment in preparation for charter and full commercial operation in mid-August.

WindPartner and ESNA have a long-term cooperation agreement with the ambition to build a series of this vessel type over the next few years.