Will a New Deepwater Port in the Gulf of Mexico Boost Crude Exports? 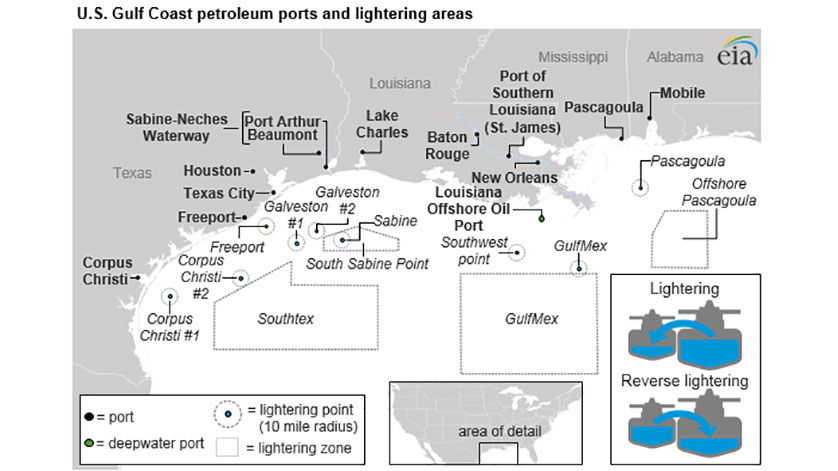 On 6 August 2018, the Maritime Administration (MARAD) and the U.S. Coast Guard (USCG) published an announced that they have received an application for the licensing of a deepwater port.

This comes on the heels of an EIA report that concluded that recent sustained growth in U.S. crude oil exports has happened despite the fact that U.S. Gulf Coast onshore ports cannot fully load Very Large Crude Carriers (VLCC), the largest and most economic vessels used for crude oil transportation. Instead, export growth was achieved using smaller and less cost-effective ships.

Each VLCC is designed to carry approximately 2 million barrels of crude oil. Because of their large size, VLCCs require ports with waterways of sufficient width and depth for safe navigation. All onshore U.S. ports in the Gulf Coast that actively trade petroleum are located in inland harbors and are connected to the open ocean through shipping channels or navigable rivers. Although these channels and rivers are regularly dredged to maintain depth and enable safe navigation for most ships, they are not deep enough for deep-draft vessels such as fully loaded VLCCs.

To circumvent depth restrictions, VLCCs transporting crude oil to or from the U.S. Gulf Coast have typically used partial loadings and ship-to-ship transfers. These transfers take place in designated lightering zones and points that exist outside many of the largest U.S. petroleum ports and can increase the cost of exporting crude oil by a substantial amount.

TGTI is proposing to construct, own, and operate a deepwater port terminal in the Gulf of Mexico to export domestically produced crude oil. Use of the DWP would include the loading of various grades of crude oil at flow rates of up to 60,000 barrels per hour (bph). Approximately eight Very Large Crude Carrier (VLCC) vessels (or equivalent volumes) would be loaded per month from the proposed deepwater port. Loading of one VLCC vessel is expected to take 48 hours, including vessel approach, mooring, cargo transfer, and vessel departure.

The overall project would consist of three distinct, but interrelated components: (1) The “offshore” component; (2) the “inshore” component; and (3) the “onshore” component. The proposed deepwater port (offshore component) would be located approximately 12.7 nautical miles off the coast of North Padre Island (Kleberg County, TX) and consists of 14.71 miles of two new parallel 30-inch diameter crude oil pipelines, which terminate at a single point mooring (SPM) buoy. The SPM buoy system would be positioned in water depths of approximately 93 feet and consist of a pipeline end manifold, catenary anchor leg mooring system, and other associated equipment. The SPM would be located in BOEM lease block number 823 at latitude 27°28′42.60″ N and longitude 97°00′48.43″ W.

Onshore components associated with the proposed project include the construction and operation of an onshore storage terminal facility (OSTF), booster station, and approximately 6.36 miles of two new parallel 30-inch diameter pipelines located within Nueces and Kleberg Counties, TX. The OSTF would occupy approximately 150 acres in Nueces County, TX and would consist of all necessary infrastructure to receive, store, measure and transport crude oil through the proposed inshore and deepwater port pipeline infrastructure. The proposed booster station would occupy approximately 8.25 acres in Kleberg County, TX and would consist of the necessary pumping infrastructure to support the transport of crude oil from the OSTF to the deepwater port. Onshore pipeline infrastructure would extend from the OSTF to the landward side of the mean high tide line located at the interface of the western shoreline of the Laguna Madre.

The license application is available for viewing here under docket number MARAD-2018-0114. Comments can be submitted electronically at that site.