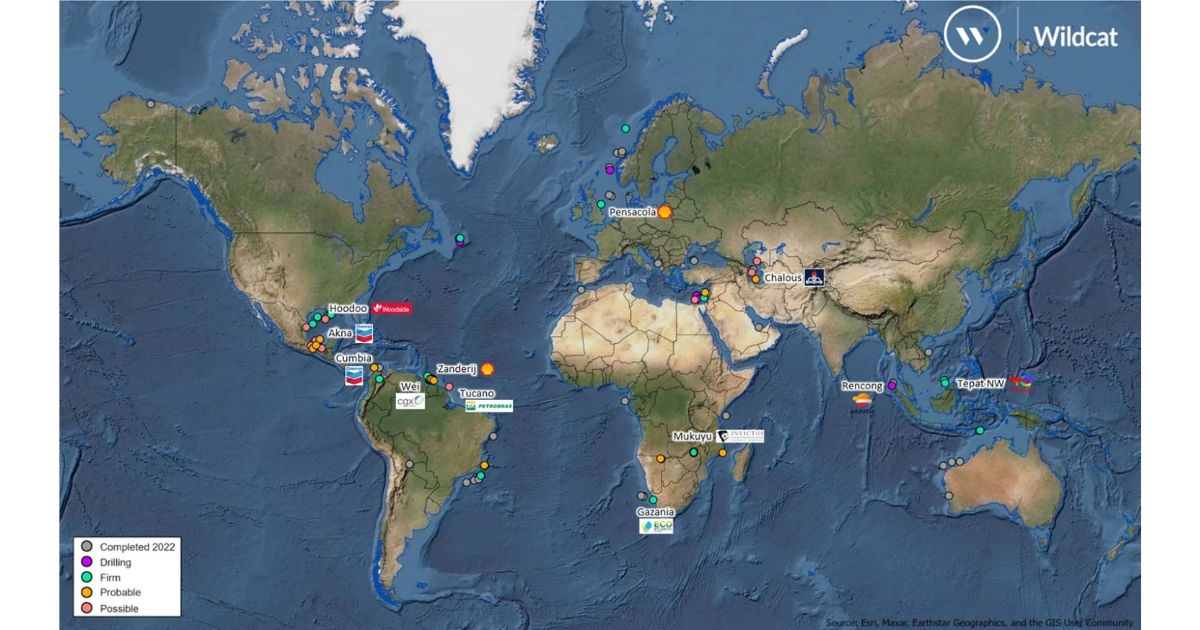 38 high-impact[1] exploration wells were drilled in the first half of 2022, similar to the same period in 2021 when 39 wells completed. The 38 wells resulted in 13 potentially commercial discoveries at a 34% commercial success rate, delivering ~6bnboe of discovered resource.

Eight of the wells tested frontier plays, with significant basin-opening discoveries at Venus and Graff in the Orange Basin offshore Namibia. Venus is the largest discovery in 2022 so far, with multi-bnboe potential in a Lower Cretaceous Aptian-Albian basin floor fan. There were, however, key frontier failures at Mlima in the Lamu Basin offshore Kenya and at Ulcinj offshore Montenegro.

18 wells tested emerging plays in 1H 2022 resulting in nine commercial discoveries and a 50% commercial success rate. Eight wells were completed in the Upper Cretaceous play offshore Suriname-Guyana delivering six successes. The other emerging play discoveries were in the Levantine (Athena), Perth (S Erregulla) and Orange (La Rona) basins. Key emerging play failures include Cutthroat in the Sergipe-Alagoas Basin, which tried to extend the Barra Upper Cretaceous play, as well as Apus in the Roebuck Basin offshore Australia, which was unsuccessful in extending the Dorado play.

High impact exploration in maturing/mature plays disappointed, with only one potentially commercial discovery from 12 wells drilled, at Huron in the US Gulf of Mexico. There were multiple failures attempting to extend the pre-salt play in Brazil, as well as further disappointments in the SWAP license in the shallow waters of Azerbaijan.

High impact drilling activity will pick up in the second half of the year, with between 80 and 90 high impact wells expected to have been drilled by the end of 2022, the highest number since 2019 when 98 high impact wells completed.

South America will continue to be an exploration hot spot with more wells planned for the Suriname-Guyana basin and offshore Brazil. Africa will see a return to high impact exploration in 2022, with key wells planned in South Africa, Mozambique and Zimbabwe following the successes in Namibia earlier in the year. Whilst activity levels in Asia-Pacific and NW Europe are relatively stable, 2022 sees a return to high impact exploration in the deepwater of the Eastern Mediterranean after 2021 when no wells were drilled.

Westwood has highlighted 13 wells planned for the remainder of 2022 as ‘key wells to watch’. These include a number of frontier play tests, for example Raia offshore Mozambique, and Pensacola, offshore UK; extensions of proven plays, including Zanderij offshore Suriname and Hoodoo, US Gulf of Mexico; and large prospects in proven plays, such as Wei, offshore Guyana.

High impact drilling performance for 1H 2022 as well as the key wells to watch for 2H 2022 are reviewed in detail by Westwood in a recently published report which provides descriptions of the plays and prospects along with the key risks and implications of success.

A subset of these wells will be presented in Westwood’s ‘Key Wells to Watch’ webinar on August 4, 2022. If you are an existing Wildcat client, please contact Ili Afifuddin iafifuddin@westwoodenergy.com to request an invitation.