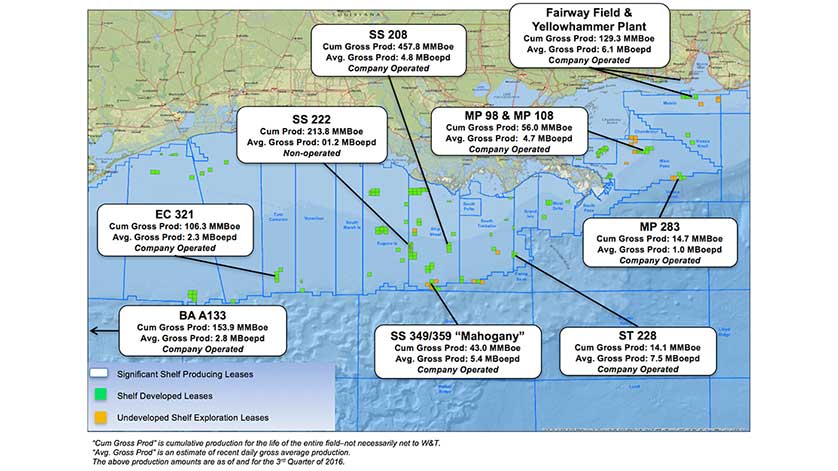 W&T Offshore, Inc. (NYSE: WTI) announced last week, that the Ship Shoal 349 A-18 well, its most recently completed well in its Mahogany field, was successfully brought on production on January 17, 2017.

The well is ramping up to full rates and thus far has achieved a production rate of 3,275 barrels of oil per day and 5.6 million cubic feet of natural gas per day, for a total of approximately 4,200 barrels of oil equivalent (Boe) per day at a flowing tubing pressure of over 9,000 psi. The Company expects to increase the A-18 production rate to in excess of 5,000 Boe per day consistent with its reservoir management plan.

As previously reported, the SS 349 A-18 well logged 149 feet of net oil pay in five zones and extended the size and depth of the Mahogany field. The well was completed in the main objective 'T' Sand, with future recompletion opportunities to additional pay zones available in the well. This deep shelf subsalt well was drilled to a total vertical depth of approximately 20,000 feet in a water depth of 372 feet on the western side of the Mahogany field. W&T holds a 100% working interest in the Mahogany field.

Tracy Krohn, W&T Offshore's Chairman and CEO, stated, "The SS 349 A-18 well is proving to be another substantial producer from an outstanding field that continues to expand in size. With its high-quality rock properties, including very high porosity and permeability, we anticipate strong production rates from this well for years into the future. Our SS 349 A-14 well that originally discovered the 'T' sand in July 2013 has produced a total of 3.8 MMBoe gross from the 'T' sand to date. As a result, the economic returns on these wells are excellent.

"As we stated on January 24th, our 2017 capital budget includes the drilling and completion of three additional wells in the Mahogany field, with each project expected to achieve a rate of return in excess of 100%, with a relatively quick payback. We have multiple 'P' Sand, 'T' Sand and 'Q' Sand targets and the thick stacked pay sands that will offer drilling and recompletion opportunities for years to come," concluded Mr. Krohn.

Tom Murphy, W&T Offshore's COO, stated, "The A-18 well has exceeded our pre-drill production rate expectations. Initial indications are that the A-18 well is located in the same large reservoir as the original 'T' sand discovery well, the A-14. This provides excellent encouragement for our expansion plans in this reservoir including exploitation of the newly discovered 'U' sand," concluded Mr. Murphy.

The Company also announced that it has posted a new investor presentation to its website that includes slides concerning projects planned for the 2017 capital program. The presentation slides can be accesses from the Investor Relations page of W&T's website under "Presentations."