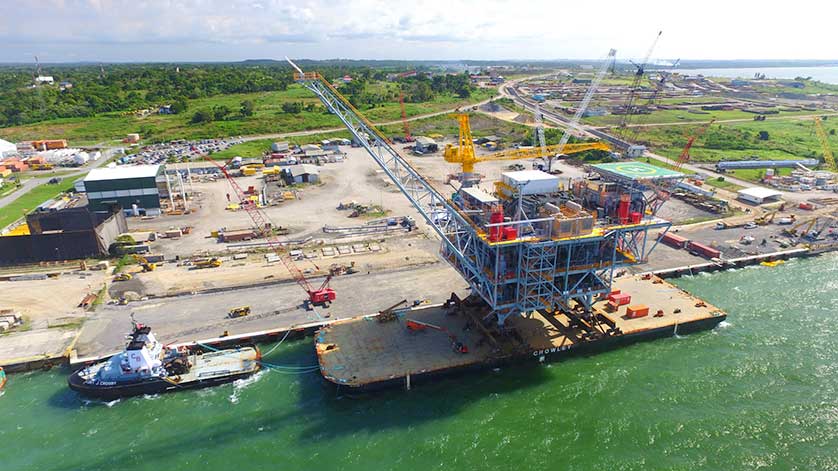 Trinidad Offshore Fabricators Unlimited (TOFCO) recently completed work for the Juniper offshore gas platform topsides at its facility in La Brea, Trinidad. The project marks a milestone for Trinidad and Tobago as it is the largest offshore structure ever fabricated in the country.

Juniper is a Normally Unmanned Installation (NUI) measuring 145 feet to the top of the helideck and weighing approximately 5,200 short tons. It was recently installed 50 miles off the southeast coast of Trinidad at a water depth of 360 feet. An anticipated production capacity of 590 million standard cubic feet per day will flow through the Mahogany B offshore hub.

Projects of this size and complexity pose unique challenges. However, in the end these challenges were overcome and TOFCO not only delivered this historic project safely and within budget, it was also fully completed and pre-commissioned prior to the scheduled sail-away date. Even with the aggressive schedule, quality was not sacrificed and global benchmarks were exceeded by working more than 2 million man hours on Juniper without a lost-time incident.

Over the past decade, TOFCO has installed management systems and processes to maximize efficiency and ensure quality control for all projects. As a result, the company has successfully fabricated 10 major offshore structures, essentially establishing the offshore fabrication industry in Trinidad and Tobago and developing a base of skilled workers.

The company relied on extensive communication and planning as well as a team of skilled workers and craftsmen, 98 percent of whom were native Trinidadians — most from La Brea and surrounding areas. More than 750 workers were engaged on the project at its peak. TOFCO’s employee mentoring model has empowered its workers by providing internationally accepted skill set training, education and career development.

“The construction of the Juniper topside by TOFCO is as much a victory for Trinidad and Tobago and the community of LaBrea as it is for the companies involved in the project,” said TOFCO General Manager Javed Mohammed. “We look forward to taking this success into securing future projects.”

Fabrication of the Juniper topsides was significant for the Trinidad and Tobago economy because it provided local contracting and employment opportunities in a wide range of crafts and disciplines, helping to strengthen and stimulate the domestic oil and gas services supply chain. When Juniper begins production, it is expected to help close shortfalls experienced by the downstream and LNG processing plants.

ROG Completes the Modification and Recom