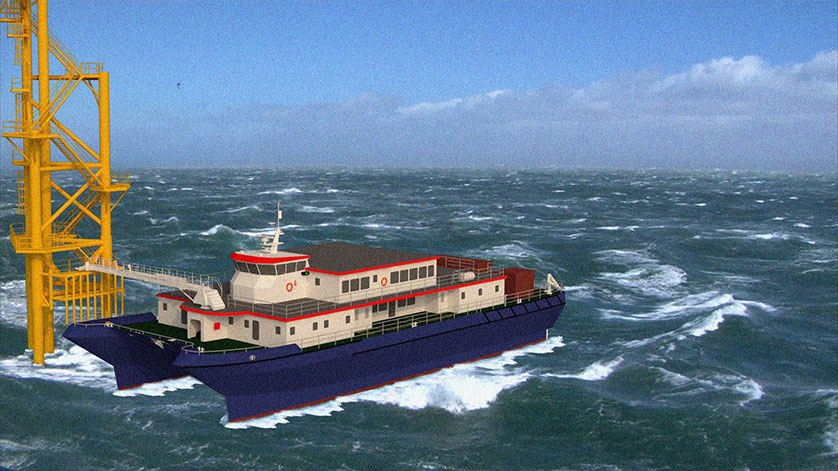 The company has recently released details of its new Walk to Work (W2W) Swath CTV capable of servicing the next generation of Round 3 windfarms, giving operators a “better alternative” to ordering larger vessels.

“The next round of windfarms and the future vessel requirements for higher wave height and being longer at sea is due to windfarms being placed further out to sea,” said John Kecsmar, naval architect, Ad Hoc Marine Designs.

“Our Typhoon Class Swath design is the best one on the market to meet these requirements going forward.”

On the contrary he said, existing CTVs are unsuitable for the much longer voyages to the outer edges of round 2 and round 3 farms, principally owing to the requirements of running and transferring in 3m high seas, especially considering most of their profile will be stationary/loitering.

The choice of which type of vessel to choose rests with ensuring the motions during transit and transfer are sufficiently low to prevent seasickness and fatigue in the higher sea states.

This has historically meant going for a much larger vessel to move the natural periods of motions away from the expected encounter periods.

But the success of the 26m Typhoon Class, MCS Swath 1, which runs in seas states with vertical accelerations less than 0.1g in Hs=2.5+m seas, points to an effective alternative to ordering a larger vessel.

The all new 41m Swath uses the experience of MCS Swath 1 to offer not only superior seakeeping during transits, but also transfers.

It tunes the Swaths’ motions away from expected sea states coupled with the addition of Island Engineering’s zero heave mode built-in to the motion control system.

This has ensured that the whole vessel is ‘heave damped’ and does not require any heave dampened gangway for transfers.

The 41m CTV is designed to run in Hs=3.5m sea heights and adopts the same philosophy of MCS Swath 2, by going quad drive with four CAT 3512C engines rated at 1678kW each, giving 25 knots.

This enables the operator to reduce fuel consumption by running on just one or two smaller engines when on the tower, or just the gensets when in ‘hotel’ mode for long extended periods.

The vessel is capable of being at sea for up to two weeks, has accommodation for 24 technicians in their own individual cabins and can carry any combination of 4 ISO containers.

It also comes with the option of Ad Hoc’s unique DampaCat system which increases damping even further.

For operators after an even more compact vessel, Ad Hoc has a slightly smaller 33m Typhoon Class Swath that is a smaller version of the 41m. It sleeps 12 passengers and provided up to two weeks endurance offshore.