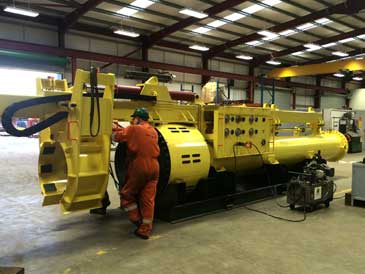 Pipeline technology company, STATS Group, have developed a Flangeless Subsea Launcher (FSL) which offers greater flexibility and can be positioned at any given position in depths of up to 2,220 meters.

Currently, temporary subsea launchers are designed for flanged pipe connection to allow maintenance pigs and isolation plugs to be deployed and recovered for pipeline maintenance or repair operations, however, flanged connections limit the location of where a subsea launcher can be attached.

The STATS designed flangeless solution, which was this week launched at the Subsea Expo exhibition in Aberdeen (3-5 February), can be efficiently lowered to the seabed and introduced to an open pipe end without the need for hyperbaric welding.

STATS Group director of EPRS and subsea services, Dale Millward, said: “Demand for this technology is growing and we have seen global enquiry levels increase in recent months. We are currently designing and manufacturing an ROV compatible launcher as part of an intervention and repair project on a damaged subsea pipeline for a major operator in the South China Sea.

“Our client centered approach and extensive engineering capabilities allows us to develop cost-effective solutions to meet their exact requirements and overcome their pipeline integrity issues.”

The launcher housing incorporates the lock and seal module which when actuated provides a secure connection to, and seal against, the outside diameter of the pipe using STATS proven lock and seal technology. Once actuated, the locks prevent movement of the pipe during pigging operations and the seal provides a leak tight barrier.

The Aberdeenshire-based company have recently supplied a Flangeless Subsea Launcher with a total of six 32” Remote Tecno Plug™ isolation tools for a project in the Black Sea.

This equipment will enable pipeline flood prevention and wet buckle recovery solutions during pipe laying operations, providing contingency equipment to isolate the pipeline in the event of a wet buckle.