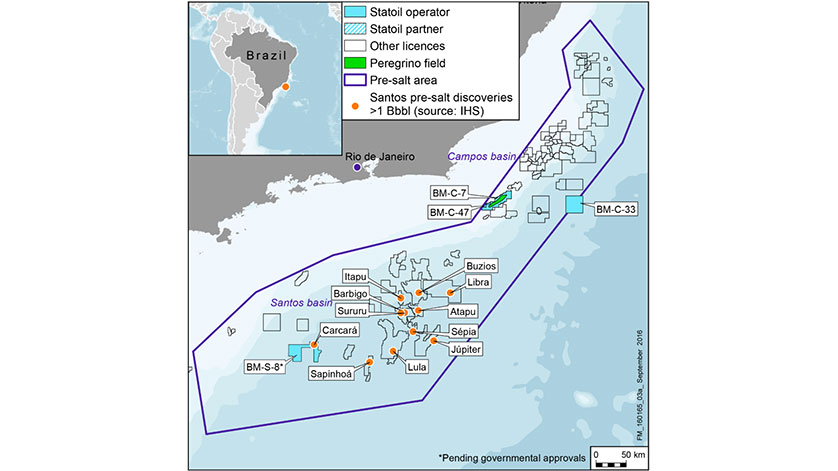 Statoil ASA and Queiroz Galvão Exploração e Produção (“QGEP”) have signed an agreement for Statoil to acquire QGEP’s 10% interest in the BM-S-8 license in Brazil’s Santos basin. The additional 10% equity will increase Statoil’s operated interest in the license from 66% to 76%. The total consideration for the transaction is USD 379 million.

BM-S-8 includes a substantial part of the Carcará discovery comprising high-quality oil of around 30° API and with associated gas in a thick reservoir with excellent properties. Statoil estimates the recoverable volumes within the BM-S-8 license to be in the range of 700 to 1,300 million barrels of oil equivalent.

“This acquisition is a further expression of our confidence in Brazil, a core area for Statoil. It also reinforces our position in a world-class asset which is a good match with our competence and capacity. The transaction supports our strategy to pursue high value and low carbon opportunities”, says Anders Opedal, Statoil’s Country Manager for Brazil.

This transaction is Statoil’s second in BM-S-8, following the agreement in 2016 with Petróleo Brasileiro S.A. - Petrobras (“Petrobras”) to acquire its 66% operated interest, and strengthens Statoil’s position for operatorship of the unitized Carcará field.

As with the 2016 transaction, half of the total consideration will be paid upon closing of the transaction, with the remainder being paid when certain conditions have been met. These are partly related to the license award, but mainly to the future unitization of Carcará.

Closing is subject to customary conditions, including partner and government approval.

Statoil Establishing a Digital Center of

Statoil Announces Revises Plans for the

Statoil and Partners Start Production at

Statoil Acquires 25% of the Roncador Fie