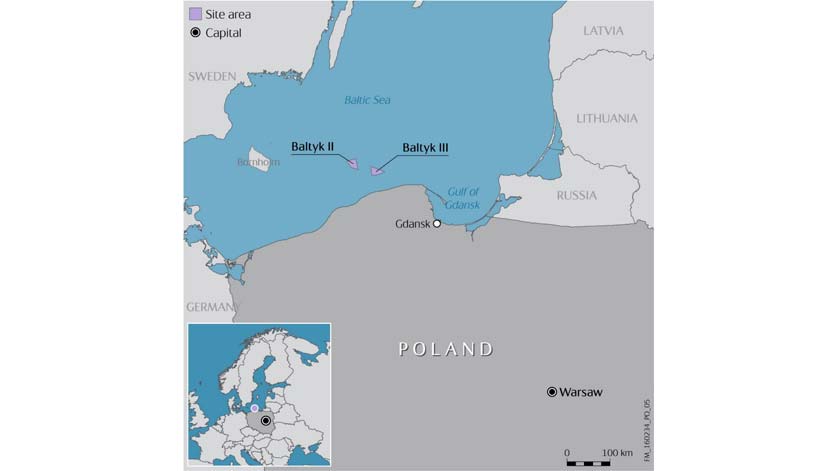 The two projects have a planned capacity of 1200 MW with the potential to power more than 2 million Polish households.

Statoil is also entering into a 50/50 joint venture with Polenergia to further mature these projects with Statoil being the Manager for the development, construction and operational phases.

"We are very pleased to have entered into a partnership with Polenergia, which is an experienced energy company with a growing renewable portfolio and in-depth knowledge of the Polish electricity market. Statoil has an ambition to grow significantly within renewable energy investing up to EUR 10 billion in profitable renewable energy towards 2030, and this acquisition strengthens our presence in the Baltic Sea area giving opportunities for scale and synergies in a longer perspective," says Irene Rummelhoff, executive vice president of New Energy Solutions in Statoil.

Bałtyk Środkowy II and III wind farm areas are located in the Baltic Sea approximately 27 and 40 kilometers from the port of Łeba in water depths of 20-40 meters. Statoil is already developing the Arkona offshore windfarm together with EON in the German part of the Baltic Sea. The company is also operating three offshore wind farms off the UK coast.

Offshore wind already has a strong foothold in Europe with over 15 GW installed capacity, with a potential to reach between 50 and 70 GW by 2030. Polish Baltic Sea has a potential in excess of 8 GW, where the first 4 GW could be in operation by 2030.

"We are entering a market with growth potential through two of the most advanced offshore wind developments in Poland. The country is well-placed to develop a strong offshore wind industry that would create jobs and value in one of the most dynamic parts of the European markets. Following a dramatic reduction in cost for offshore wind, we are looking forward to work with our new partner, the Polish authorities and the Polish supply chain to advance offshore wind as a competitive source of energy and industry," says Rummelhoff.

The closing of the transactions with Polenergia is subject to consent of the President of the Office of Competition and Consumer Protection in Poland.