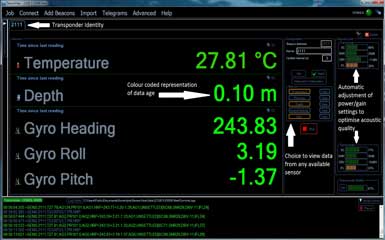 Software that enables acoustic data to be streamed in real-time from subsea structures as they are installed has helped to reduce non-production time (NPT) for independent oil and gas producer, INPEX, and its survey contractor, Neptune Geomatics, during construction of the Ichthys gas field, offshore Western Australia.

Supplied by subsea technology company Sonardyne Asia Pte. Ltd in Singapore, the SensorView software allowed data gathered by an acoustic transponder mounted on Tubing Head Spools (THS), to be transmitted at high speed to rig personnel monitoring the installation operations. The parameters measured by the transponder’s on-board sensors included heading, depth, sound velocity and inclination, and meant that delays previously incurred while aligning each THS to drilling templates, could be substantially reduced.

Located 220 kilometers off the coast, Ichthys represents the largest discovery of hydrocarbon liquids in Australia in over 40 years. It covers an area of around 800 square kilometers in water averaging depths of around 250 meters and is estimated to contain more than 12 trillion cubic feet of gas and 500 million barrels of condensate.

The field will be developed using a semi-submersible central processing facility, the largest of its kind anywhere in the world, and an FPSO connected by 890 kilometers of gas export pipeline to an onshore processing and storage facility at Bladin Point near Darwin.

As part of a 40 month contract, INPEX contracted Neptune to provide rig positioning and survey services during the drilling and completions phase of the project, work that is being undertaken by the Jack Bates and Ensco 5006 mobile drilling units.

At each of the five drill centers, Neptune installed a seabed array of Sonardyne Compatt 6 Long BaseLine (LBL) acoustic transponders to accurately position the spud locations and monitor the installation of the Drilling Guide Bases (DGBs) as they were lowered from the surface. Structure-mounted Compatt 6s fitted with high resolution inclinometers and depth sensors were used to verify final DGB positions and inclinations following cementing of the conductor in the top hole section.

While trying to align each THS with the DGBs once they arrived at depth, operational delays leading to rig non-productive time were incurred. To avoid such delays, INPEX requested that Neptune gather real-time positioning and heading information on each spool as it was being maneuvered.

The requirement was met using SensorView, Sonardyne’s dedicated sensor monitoring software application. It can be used in parallel with 6G acoustic positioning systems such as Fusion, or as a standalone solution for cost-effective remote monitoring and subsea data harvesting projects.

At Ichthys, SensorView was mobilized on one of the rigs and interfaced with a Dunker 6 transceiver which was deployed over the vessel’s side. Subsea, a Sonardyne GyroCompatt 6 was temporarily mounted on each THS and attached using a customized bracket designed to allow an ROV to recover the unit after each THS was installed.

Commenting on the successful deployment of SensorView, Pat Fournier, Operations Manager for Neptune’s Geomatics service line said, “During Neptune’s recent Ichthys drilling and completions campaign, SensorView delivered us THS heading update rates of approximately one every three seconds. This was sufficient for our surveyors to fully understand the dynamic motion of the structures and thereby reduce the time needed to land them in the correct location.” He added, “We were impressed with the ease with which we could configure SensorView to work with our LBL acoustic hardware and view the data streams we needed to see.”

Sonardyne Sentinel: Closing The Gap In U

Noble Globetrotter I Upgraded to Latest

EMGS Increases Its Investment with Sonar