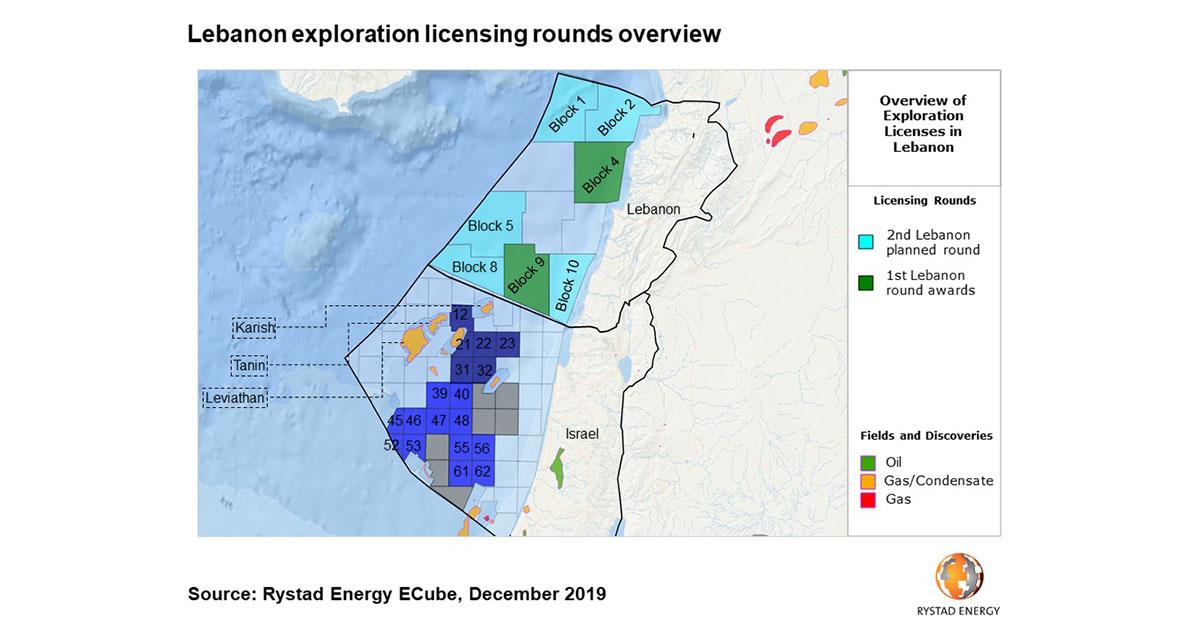 Based on currently available geophysical data, the Lebanese government estimates that the offshore oil and gas frontier areas in the East Mediterranean may hold around 25 trillion cubic feet of natural gas reserves, though this has yet to be proven. An initial exploration well is expected to be drilled in block 4 by the end of 2019, or in early 2020.

Once an exploration blind spot, the Eastern Mediterranean is now a hot region of interest, and a relatively unexplored swath off the coast of Lebanon – which is surrounded by known hydrocarbon systems – offers great promise. Upcoming licensing rounds offer blocks in this unexplored expanse, and come at a time when the region is in the midst of ramping up local production to meet domestic energy demand. This will be Lebanon’s second offshore licensing round, offering Blocks 1, 2, 5, 8, and 10 in its exclusive economic zone. Rystad Energy expects to see a dramatic increase in offshore exploration spending in Lebanon and Israel, with activity waves oscillating between up and down years, resulting in material upstream spending gains.

“The lack of exploration in the area at present is due to a combination of two factors; insufficient technical understanding of the acreage, and increasing political unrest,” said Palzor Shenga, a senior analyst on Rystad Energy’s upstream team.

The deadline for submitting offers is next month, which makes things a bit tricky for interested companies. Some early birds may cash in during the current favorable fiscal regime, while others will wait to make their bets until results are more assured,” Shenga clarified.

A major discovery would be a welcome financial boon for Lebanon, a country facing a severe economic crisis and chronic power shortages, in addition to the influx of immigrants as a result of the Syrian crisis. As onshore resources have matured and grown in number, offshore exploration is again in focus.

“This investment upsurge in the coming years will likely be driven by new drilling contracts, licensing awards, and future bid rounds,” remarked Taiyab Zain Shariff, an analyst on Rystad Energy’s upstream team. “Most of the spending in Lebanon will be driven by offshore deep and frontier areas, which are believed to hold similar petroleum systems as seen in neighboring countries.”

“Nevertheless, it will still take more than a decade before those involved enjoy the fruits of their labor,” said Shenga. “It will still take years to develop the infrastructure required to produce and distribute any additional reserves found offshore Lebanon”.