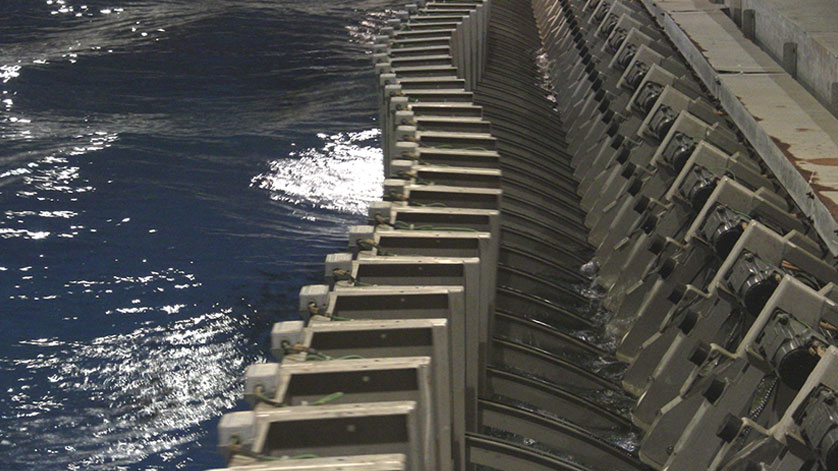 Bosch Rexroth, a leading company in drive and control solutions, has been awarded a new contract to install two wave generator systems for Indonesian Hydrodynamic Laboratory (IHL), an advanced research laboratory of BPPT (The Agency for the Assessment and Application of Technology). The new electrical systems will replace the original hydraulic system supplied by Rexroth 25 years ago.

IHL has sophisticated facilities, including experimental tanks, for testing many types of ocean vessels. The laboratory conducts research and development of propulsive, seakeeping and maneuvering performances of ships and offshore structures of all types. Talks with Rexroth for a new wave generator began three years ago and after the tender beginning this year, the contract was signed in March this year. Delivery of the new systems will be end of this year. While the existing basin will remain, the old hydraulic machinery will be replaced with the new wave generators. The new system is a multi-directional wave generator, with moveable flaps operated by AC servo drives. Installation will be carried out by a local contractor. They will be working closely with the team at Rexroth and one of Bosch Rexroth‘s specialists who will be on site.

“In addition to replacing the old system, the existing basin is being split into two parts,” said Corino Corver from Bosch Rexroth. “One half will provide a wave generator for deep water (offshore), while the other can be used for shallow water applications. The new systems need to fit the existing environment, which involves making adaptations to the existing foundations to support the new installation. These are being handled by a local contractor, and we are providing drawings and reaction force data to help ensure correct implementation.“

The hydraulic wave generator Rexroth supplied in the 90s gave many years of service. During all those years, Rexroth continued to support them if they had any specific questions about the system. Answers from either the local Bosch Rexroth organization or their specialists in the Netherlands. Both system and service quality made Rexroth a prime candidate for the new replacement wave generator, and they successfully won the tender for the project.“

“We are really pleased that IHL returned to us after 25 years,” said Corino Corver. “It shows how important it is to deliver ongoing service to customers.“