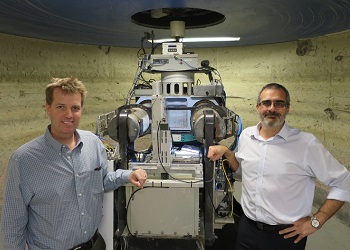 The University of Western Australia has won $1 million in funding from the Australian Renewable Energy Agency (ARENA) to work on the deployment of arrays of wave energy converters. The project, in collaboration with Carnegie Wave Energy, aims to reduce the cost of wave energy converters by optimizing their location and arrangement to maximize power generation and minimize initial construction costs.

Deputy Director of UWA’s Centre for Offshore Foundation Systems, Professor Christophe Gaudin, said it was one of a number of projects awarded more than $17 million in grant funding by ARENA to build on Australia's leadership in renewable energy research and development.

“While it’s now widely recognized that wave energy technology is a viable source of clean electricity, there are challenges that have to be overcome for it to be commercially viable and attention has now turned to ways of reducing costs to make it a competitive alternative,” Professor Gaudin said.

Professor Ryan Lowe and Professor Christophe Gaudin with one of the two centrifuges used for research at UWA’s Centre for Offshore Foundation System. Credit: UWA

“One of the key objectives of the wave energy industry today is to produce commercially viable wave farms by placing multiple wave energy converters (WECs) together in an array. “Our research will focus on the infrastructure required to install and operate large arrays of wave energy converters at sea, and notably on the foundation engineering where we think big savings can be made.

“At the moment the technology being used comes directly from the gas and oil industry, however there are specifics to consider when designing foundations for wave energy converters, particularly around wave loadings and soil conditions.

“We’ll investigate the size, pattern and location of arrays of the converters, taking into account the distance to shore and associated wave conditions, and the nature and mechanical characteristics of the seabed sediments.

“All of these factors have an effect on the total cost of the infrastructure and have been acknowledged by ARENA as having the potential to reduce energy costs in the future.”

ARENA CEO Ivor Frischknecht said the funding would create clear pathways for renewable energy technologies to move from the laboratory to field by fostering collaboration between research institutions and industry.

“Each successful project is focused on delivering commercially viable solutions, aimed at solving a current industry challenges. The rich array of industry partners shows the breadth of sectors that will be involved in the transformation of Australia’s energy networks and systems,” Mr. Frischknecht said.

“ARENA’s $17 million funding is leveraging substantial contributions from private and public sectors, with combined project values totaling more than $55 million. This will tap into our home-grown ingenuity and complement our existing portfolio of 144 R&D projects.”

Carnegie Wave Energy is the owner and developer of the patented CETO wave energy technology that converts ocean swell into zero-emission renewable power and desalinated freshwater.