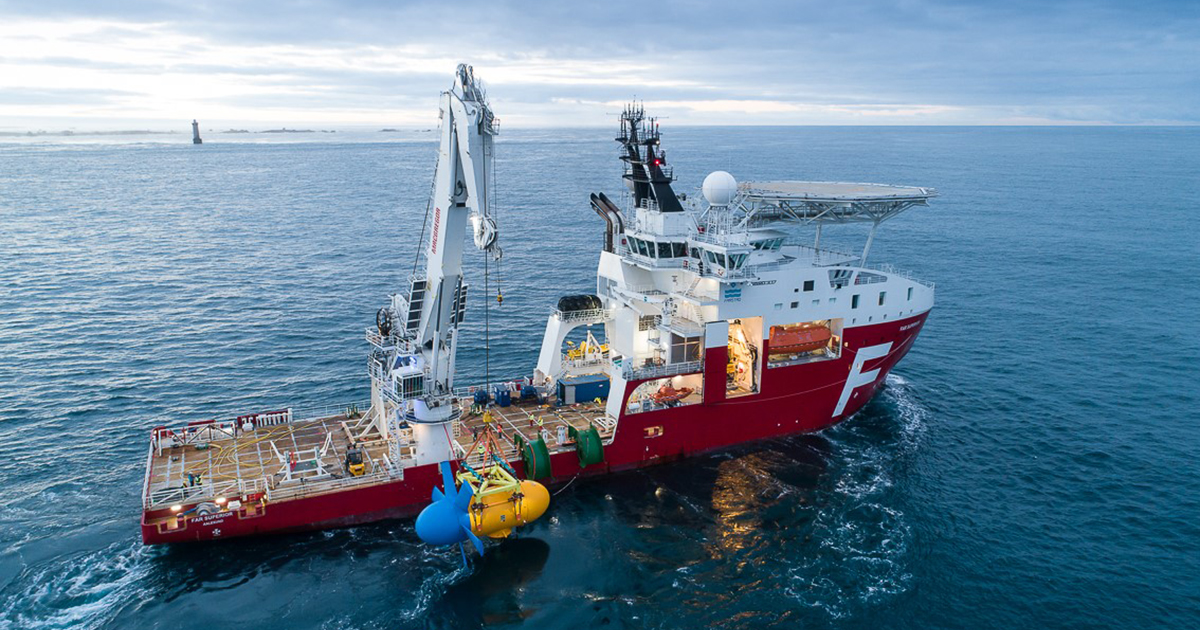 Sabella, a pioneering tidal and ocean stream turbine developer, has partnered with QOS Energy to improve the performance monitoring of its ground-breaking Ushant tidal energy project.

The first 1MW tidal turbine of the plant, immersed 55 meters under water off the west coast of France, is equipped with more than 100 sensors gathering data every 5 minutes. It now uses QOS Energy’s powerful data intelligence platform to identify, assess and anticipate potential failures.

Sabella’s 1MW D10 turbine was initially commissioned in 2015 in the Fromveur Passage, a strait that lies between Ushant Island and the Molène archipelago, off the coast of the French region of Brittany. After undergoing key technology upgrades, the tidal turbine was redeployed for the second time in October 2018. Once again, the 400-tonne machine lies on the French seabed and captures the tide to provide renewable power to the 800 inhabitants of Ushant island. To optimize the turbine’s operation, QOS Energy and Sabella closely collaborated to develop specific data acquisition techniques and innovative analytics tailored to the constraints of the demanding sub-marine environment.

Sabella is among the very few companies in Europe that can provide commercially-ready tidal energy technology. Its D10 machine is designed to thrive in the harsh marine environment, and to be maintainable long-term. It boasts a simple and robust design, relying on key components redundancy to ensure a very high level of availability. Sabella’s technology can be deployed as part of large tidal commercial arrays, as well as answer the energy needs of remote off-grid island communities.

“Tidal turbine technology has great potential for off-grid islands that can now harvest their abundant tidal resources,” said Daviau. “Unlike most other sources of clean power, tidal energy produces renewable power in a regular and predictable manner, enabling operators to reliably forecast power production over the full life-cycle of a project.”

Off-grid tidal energy represents a considerable and largely untapped market, considering that about 11,000 islands worldwide are permanently inhabited by a population in excess of 730 million people in total. In most cases, off-grid island communities that are also among the first victims of climate change, rely on expensive and polluting diesel-powered technologies to ensure power supply. With an energy cost of energy per MWh that can be 5 to 10 times higher than in interconnected areas, tidal energy, potentially associated to other renewable sources and storage capabilities, is emerging as a sound economic model for off-grid islands.

“QOS Energy strongly believes that tidal energy will play an important part of the future clean energy mix, so we are very pleased to innovate with a pioneering company such as Sabella and make progress in the important field of tidal O&M. We believe that effective plant monitoring and optimization will be instrumental in bringing this emerging technology from the margin to the mainstream,” concluded Jean-Yves BELLET, VP-CTO of QOS Energy.

Sabella aims to deploy tidal projects in France, as well as in Southeast Asia and North America. With its innovative technology backed by successful pilot projects, the French company has acquired strong international recognition on the 75 to 100 GW global tidal market, which is expected to take off by 2020.