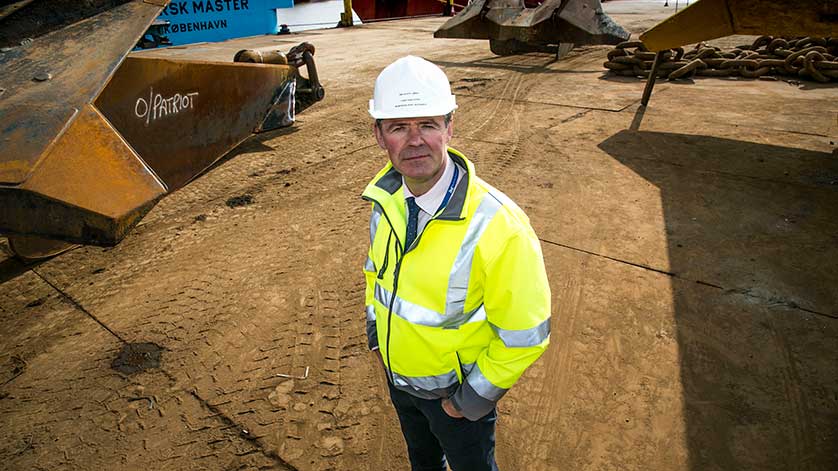 Montrose Port Authority, a leading support and service hub for the energy industry, has heralded a new era of capabilities, supporting its first project within the offshore renewable sector.

In association with NorSea Group (UK) Ltd, a subsidiary of the leading Norwegian logistics company NorSea Group AS, the Port is participating in the pioneering Hywind Scotland offshore wind project.

The four-week campaign consisted of five port calls for anchor handling tug supply vessel, the Normand Prosper. After loading chain and mooring equipment to the vessel, it then delivered the mooring systems designed to support Statoil’s floating windfarm project in the North Sea.

The components of the project were assembled at NorSea’s Group Base in Stord Norway before being shipped to the offshore project, located 14 miles east of Peterhead, while the mooring systems for the five wind turbines were stored in Montrose Port.

Throughout the campaign, NorSea acted in its capacity of onshore management contractor and utilized local expertise from Montrose-based Whyte Cargo Handlers and Chainco to handle and load the mooring systems.

Nik Scott-Gray, chief executive at Montrose Port Authority, said: “North Sea offshore wind is undoubtedly a growing market and this has instilled a sense of opportunity within the energy industry.

“We are justifiably proud of our excellent track record in mooring systems; storing and handling more than any other port in Europe. Add to this our central location to east coast windfarms such as Inch Cape, Neart Na Gaoith and Seagreen Alpha and Bravo, and Montrose Port Authority becomes the ideal port of choice to support key offshore renewable operations.”

Walter Robertson, managing director of NorSea Group (UK) Ltd, said: “We were delighted to secure this project, and nominated Montrose Port Authority because of our quayside storage capacity and excellent working relationships with the local supply chain in and around the port. We have proven our capability and the suitability of Montrose Port for this significant offshore wind project, a first for both companies in this sector.”