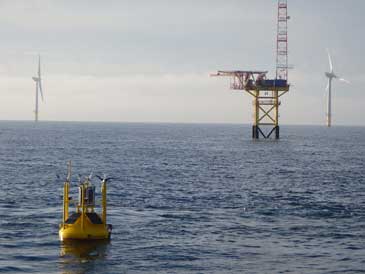 Building and operating offshore wind farms is an expensive business. To be able to estimate the profitability of the plants, first the wind potential must be determined. Fraunhofer researchers have now created a wind measurement buoy with sophisticated, precise measurement technology that supplies the necessary data.

Planners of offshore wind farms need to know which way the wind is blowing, as their profitability depends on wind speeds. “Constant high wind speeds at sea can offset the huge investment costs for building the farms and connecting them to the grid. The profitability of wind farms comes from the difference between feed-in compensation and the costs for construction and maintenance,” says Claudia Rudolph, scientist at the Fraunhofer Institute for Wind Energy and Energy System Technology IWES in Bremerhaven. Using a special wind measurement buoy, the meteorologist and her team want to calculate the wind potential and therefore the energy yields that can be expected, thus providing valuable support to wind farm planners. For this endeavor, the researchers rely on LiDAR (Light Detection and Ranging) technology.

An alternative to wind met masts
The design of the Fraunhofer IWES LiDAR buoy is based on the light buoys that have been used in the North Sea for over thirty years, which the scientists have adapted to measure wind potential. It is over eight meters in length, has a diameter of 2.55 meters and weights 4.9 tons. The buoy carries a LiDAR measuring device that measures wind speeds at heights of between 40 and 200 meters. “LiDAR systems send pulsed laser beams into the atmosphere, which reflect off of aerosol particles in the air. From the frequency shift of the backscattered signal, the wind speed and direction are calculated at the corresponding measurement heights,” explains Rudolph.

Although the technology is already used on land, it was previously considered unsuitable for measurements on buoys and floating platforms because it was too imprecise. The buoy’s own movement, which distorts the measured values, prevented the reliable use of a LiDAR device. To allow these measurements to be carried out on moving structures, the IWES researchers developed a correction algorithm that subtracts the buoy’s own movement from the measurement values.

The new floating LiDAR system guarantees high measuring accuracy, comparable to the results obtained by fixed offshore wind met masts. This was the conclusion of validation measurements carried out in the North Sea, where the buoy was installed at a location with a water depth of 30 meters at the Alpha Ventus offshore farm 45 kilometers off the coast of the island of Borkum, near the FINO 1 wind met mast. There was a 99.7 percent correlation between the values from the met mast and those from the buoy.

“Out in deep water, the LiDAR buoy is a genuine alternative to wind met masts, which measure wind speeds only at a height of 100 meters,” says Rudolph.

Another advantage of the system is that the flexible buoy can be used anywhere at sea and is quick to install, making the costs five to ten times lower. The buoys are also much easier and cheaper to maintain than wind met masts. Depending on individual requirements, the system can also measure additional parameters such as waves, currents and temperatures at the same time.

Another of the buoy’s noteworthy features is the aluminum housing that encapsulates the LiDAR measuring device and protects it against salt water and the extreme environmental conditions at sea. The housing contains special glass through which the laser beam passes unhindered and unbroken into the atmosphere. An autonomous power supply system completes the package: three small 400-watt wind generators and three 70-watt solar panels generate the electricity, while three gel batteries store it. This ensures that reserve energy is available for a week without wind and sun. Inside the floating platform there is a computer for data communication. Status and measurement data are transmitted to the recipient via WLAN or satellite.

Projects in the North Sea
A LiDAR buoy is currently being used in a research project off the coast of Denmark, while a further buoy will be used for demonstration measurements in the North Sea. Through this project, the scientists aim to present their development to the Offshore Wind Accelerator (OWA) consortium brought together by the Carbon Trust, a nonprofit organization whose mission is to promote the transition to a climate-friendly economy. “If you fulfill the OWA’s criteria, you are awarded pre-commercial status, which sends an important signal to our potential customers. It shows that our system is fully operational, and enables us to approach wind farm planners and operators with various offers such as long-term measurements for yield forecasting and online wind measurements during installation,” says Rudolph.
back to top