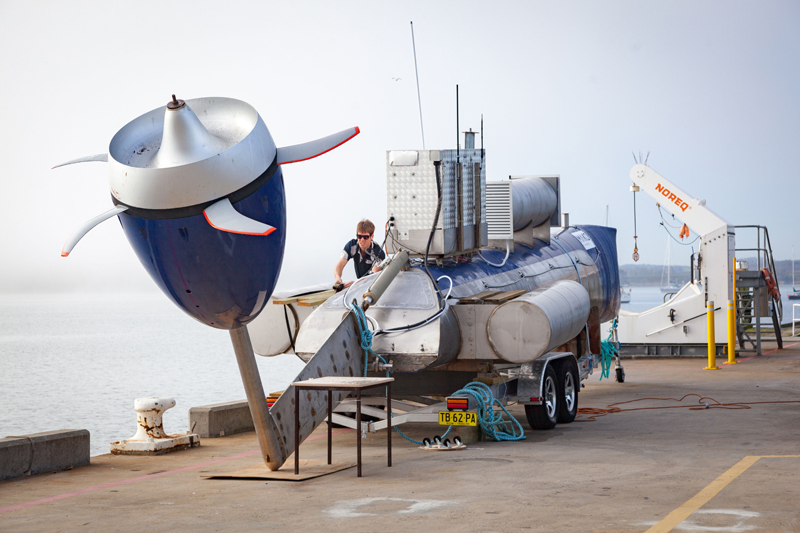 In an important step for this emerging form of renewable energy, a tidal energy turbine has been installed in the Tamar estuary in Launceston, Tasmania, as part of a project to investigate and optimize the device's performance.

Researchers at the Australian Maritime College, a specialist institute of the University of Tasmania, will conduct field experiments with a 2.4 meter-wide prototype in partnership with Sydney-based developers MAKO Tidal Turbines.

With Tasmania seen as a location with huge renewable energy potential, the site near Reid Rock (north of the Batman Bridge) was selected because of the ideal speed of the current. The turbine is secured beneath a floating platform and connected to a mooring on the east side of the estuary.

"We want to monitor the effects of this particular project, but also understand the processes so we can apply the findings to other potential tidal energy sites.

"Tidal power has the capacity to generate electricity that could become part of the energy mix for local industries, small communities, coasts and islands."

Having undertaken extensive tow tank testing with AMC, MAKO Tidal Turbines will be undertaking research into how full-scale turbines operate in a real-world environment, and to confirm their low environmental impact. The testing will include the influence of turbulence and biofouling (organisms growing on the turbine), which may impede performance and affect the longevity of the device.

"We are delighted with the results achieved by working collaboratively with AMC from tank testing though to full-scale deployment." "The Tamar estuary is an ideal location to demonstrate the MAKO turbine and its ability to deliver predictable renewable energy.

"Tidal is set to become a key part of the energy mix worldwide and our work here with AMC means Australia will continue to play a key role in this emerging global industry," Mr. Hunt said.

Dean Cook, CEO of AMC Search, explained how the project has developed and thanked those that have contributed to its success.

"Our work with MAKO on this project has been a real journey; beginning with tank testing here at AMC, followed by field testing and finally today's in situ deployment.

"Significant support for our work was provided in the early stages by an AusIndustry Innovation grant, which helped us get up and running.