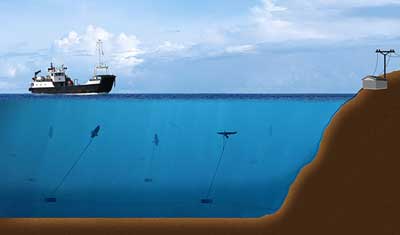 Nordic marine energy leader Minesto has entered into a technology partnership with German tidal turbine manufacturer Schottel Hydro. The objective is to supply Minesto with hydrokinetic turbine components in 2016 and 2017. ”This is a strategic technology partnership with one of the world leaders in underwater technology, ensuring the quality and performance of our marine power plant, Deep Green”, said Minesto’s CEO, Anders Jansson.

According to the newly signed agreement. Schottel Hydro will deliver a customized turbine solution which will optimally fit the requirements of Deep Green, Minesto’s underwater kite construction that is expected to be deployed in 2017 at the Holyhead Deep site off the coast of Anglesey, Wales. The lightweight nacelle power-take-off system includes a turbine, drive train, power electrics and auxiliary devices. All components will be tailor-made to fit the system of the ‘underwater kite’ perfectly.

”We are very pleased to announce this strategic partnership with one of the world leaders in underwater technology”, said Anders Jansson, CEO at Minesto. ”This will not only ensure the overall quality of Deep Green, delivering a one-stop shop turbine solution which can be perfectly integrated in our system, but also optimize product development by supplying expertise to Minesto”, he said.

The drive train concept is based upon the proven concept of the Schottel Instream Turbine (SIT). It consists of an inline arrangement of open rotor, a rotor shaft including sealing and bearing, planetary gearbox and generator. In contrast to this readily available device with rotor diameters between three and five meters, the Deep Green turbine will be significantly smaller and able to operate at higher rpms. Schottel Hydro will also carry out a full-load test series on a specially built test stand prior to installing the turbine in 2017.

During the coming three years, 19 more Deep Green-devices will follow and eventually form an array with an overall capacity of 10 MW, supplying electricity to the equivalent of 8,000 households and create local jobs in both construction and operational phases.