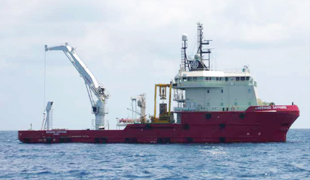 The scope of work includes, but is not limited to, structure and sea line inspection, free span correction, and corrosion prevention, in the Gulf of Thailand. The contract is awarded for a two-year term, starting from March 2016 to March 2018, with an option for one-year extension. The work will utilize the DP2 ROV Support Vessel ‘Mermaid Sapphire’ along with a deepwater work-class ROV plus associated equipment (if required) and specialist personnel. The value of the contract for the initial term is estimated to be circa USD 10 million.

The RSV 'Mermaid Sapphire' is a DP2 remotely operated vehicle ("ROV") support vessel equipped with a deepwater work-class ROV, a 23-ton knuckle boom crane and accommodation for 60 personnel. In 2012, the vessel supported James Cameron in his historical deep sea dive to the Challenger Deep, the world's deepest point in the Pacific Ocean's Mariana Trench, 10.99km below ocean surface. The RSV 'Mermaid Sapphire' is ABS classed and flies the Panama flag.

Interest of Directors and Controlling Shareholders