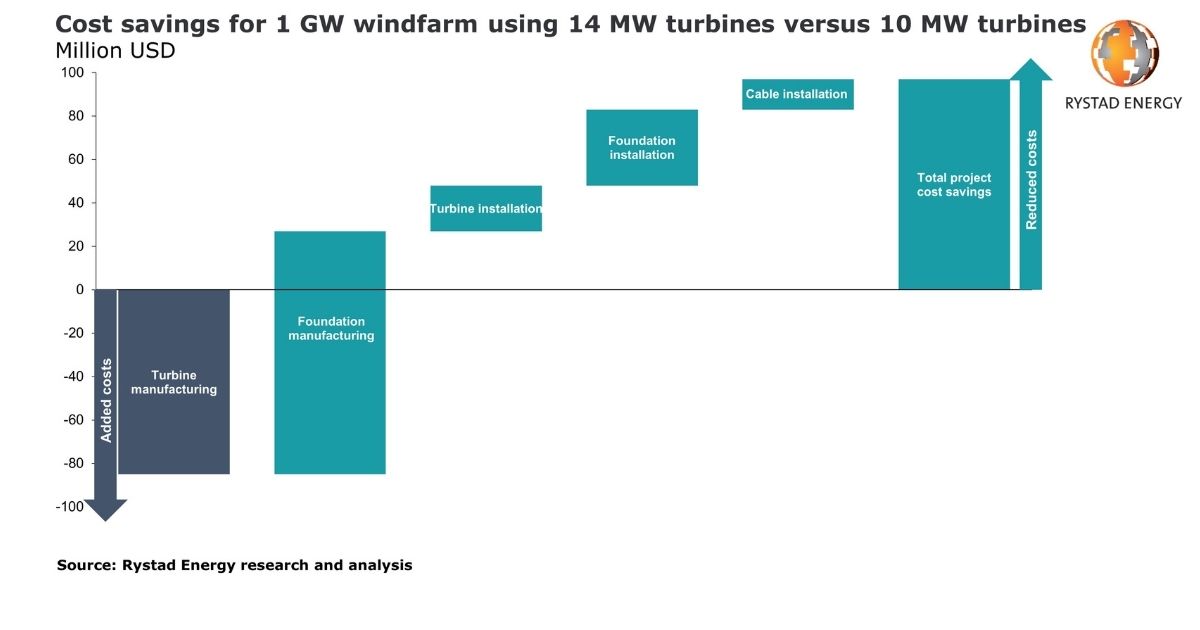 A Rystad Energy analysis shows that although they are more expensive to manufacture, choosing these giant turbines actually reduces overall costs for large-scale offshore wind farms.

Their added costs are expected to be mitigated by fewer required units and the efficiency gains associated with the newer, more technologically advanced turbines. For every project, there is also the cost of manufacturing a number of foundations, so the reduction in the number of turbines will also lead to fewer array cabling runs, which in turn reduces the installation scope.

Rystad Energy analyzed the cost of using turbines of differing sizes for the case of a 1 gigawatt (GW) offshore project. The SG 14-222 DD model will leapfrog GE’s new 12 MW Haliade-X prototype and become the largest turbine available, globally. At the moment, the largest turbines to be commissioned between 2020 and 2021 have nameplate capacities of up to 10 MW.

Utilizing 14 MW turbines instead of 10 MW ones, the number of units required for a 1 GW project falls by 28 units, from 100 to 72. Moving to a 14 MW turbine from a 12 MW turbine still offers a reduction of nearly 11 units. Overall, the analysis shows that using the largest turbines for a new 1 GW windfarm offers cost savings of nearly $100 million versus installing the currently available 10 MW turbines.

In this example, Rystad assume that the cost of a turbine is approximately $800,000 per MW on average for currently available units (i.e. turbines with up to 10 MW nameplate capacities), with a 2.5% premium applied for each additional MW for the larger units expected in the medium-term, to reflect anticipated efforts by manufacturers to capture upside.

Foundations are the main components that offer opportunities for cost reductions if larger turbines are utilized. Rystad Energy estimates that a foundation typically costs between $3 million and $4 million, with variations relating largely to foundation type and water depth. In a 10 MW to 14 MW switch, such cost savings could surpass $100 million for the developer, while savings in a 12 MW to 14 MW scenario would likely range from $30 million to $50 million.

The cost of array cables varies based on the turbine size. While the use of larger turbines implies potential cost savings through fewer foundations, the added length required for array cables for 14 MW turbines is likely to keep overall cable costs flat. However, the lower turbine count reduces the number of cabling runs and connection of turbines to the offshore substation, which in turn could cut installation costs.

This example shows that while larger units are expected to drive up the cost of turbines, reductions from other segments – namely foundations – could result in cost savings of $100 million to $120 million on manufacturing alone, helping to offset some of the developer’s expenses.

Rystad Energy also estimates that the cost to install a turbine ranges between $0.5 million to $1 million, while the cost of foundation installation ranges from $1 million to $1.5 million per unit. Using the midpoint in each range, for a 1 GW project the implied savings surpass $50 million if using 14 MW instead of 10 MW units. Under similar circumstances but comparing 14 MW against 12 MW turbines, potential savings are beyond $20 million. Furthermore, the reduction in cabling runs and connections due to the lower number of array cables could lead to additional savings of between $5 million and $15 million when using 14 MW turbines rather than 12 MW and 10 MW turbines.

On top of potential cost savings from the reduction in units, the increase in turbine size can also drive other efficiency gains. Rystad Energy has analyzed the potential reduction in the levelized cost of energy (LCOE) using Equinor’s Empire Wind in the US as a case study.