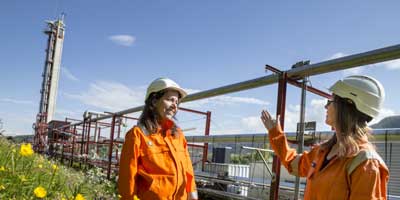 Gas fields in operation gradually lose their power in the course of time, just as we do as we grow older. This is why many ageing gas fields are given help by compressors, which help to lift the gas and its associated light oil up to the surface.

On offshore fields, compressors are installed on board platforms or on the seabed. Fresh laboratory data from SINTEF, the largest independent research organization in Scandinavia, show that machinery of this sort can be put into operation later than current numerical models have led us to believe.

Measurements made by SINTEF in its multiphase flow laboratory have given us new knowledge of how natural gas behaves on its way up from the gas field. The project, where scientists Maria Barrio (left) and Marita Wolden had central roles, was carried out in the tower in the background. Photo: Thor Nielsen / SINTEF

The pressure in all oil and gas fields gradually falls as the hydrocarbon products are extracted, rather like what happens when gas goes out of a balloon. In gas wells, the flow-rate of the gas also falls, since pressure is precisely what drives the gas out of the well.

Most gas fields also contain light oil, or condensate. The Trondheim tests have given us new knowledge about the minimum flow-rate needed in vertical wells and risers for the gas to pull the oil up with it.

“Our measurements show that the gas does not need to travel at such high speeds as we thought necessary to transport the light oil. This means that it will also take longer for the speed of the gas to fall to such an extent that the oil forms liquid plugs that choke the well. This in turn suggests that operators can wait longer than they expected before they have to rely on compressors to maintain the gas flow-rate,” explains project manager Barrio.

In their unique tests, the SINTEF researchers allowed gas to which small quantities of oil had been added, to flow upwards through a 50-meter vertical tower with a diameter of four inches.

“The backdrop for these experiments is that the petroleum industry performs mathematical simulations when it is planning how offshore fields are to be developed and operated. Until now, companies have used models that offer only approximate simulations of phenomena that have been observed in vertical gas risers,” says Barrio. The vertical flow experiments were carried out in a special heavily instrumented pipe that was erected specially for the project. The results have been used to update the simulation tool, LedaFlow, that SINTEF has developed in collaboration with oil companies ConocoPhillips and Total, and technology provider Kongsberg Oil and Gas.

Dominique Larrey, an expert on multiphase flow in the French oil company Total, explains that the new and more trustworthy model improves the confidence Flow Assurance engineers may have in the results of their simulation work. “This backs up their recommendations for the design and the operation of oil and gas production facilities. In particular, good predictions from the LedaFlow software will influence on whether and when a company decides to invest in compressors to increase gas field recoveries, whereby affecting the economics of gas field overall development,” says Larrey.

The tests were carried out at SINTEF’s Multiphase Flow Laboratory in Trondheim, the largest installation in the world for studies of how oil, gas and water flow together in one and the same pipeline.

The measurements were performed as part of an innovation project for industry (IPN), which is financed by the Research Council of Norway and LedaFlow Technologies DA.