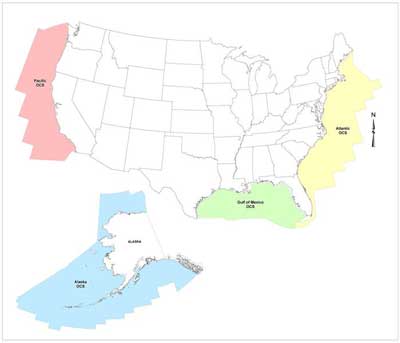 After receiving extensive public input and analyzing the best available scientific data, the Proposed Program released evaluates 13 potential lease sales in six planning areas – 10 potential sales in the Gulf of Mexico and three potential sales off the coast of Alaska. The Proposed Program does not schedule any lease sales in the Mid- and South Atlantic Program Area due to current market dynamics, strong local opposition and conflicts with competing commercial and military ocean uses.

“This is a balanced proposal that protects sensitive resources and supports safe and responsible development of the nation’s domestic energy resources to create jobs and reduce our dependence on foreign oil,” said Secretary Jewell. “The proposal focuses potential lease sales in areas with the highest resource potential, greatest industry interest, and established infrastructure. At the same time, the proposal removes other areas from consideration for leasing, and seeks input on measures to further reduce potential impacts to the environment, coastal communities, and competing ocean and coastal uses, such as subsistence activities by Alaska Natives.”

Release of the Proposed Program follows the publication of the Draft Proposed Program (DPP) in January 2015 and is one of several steps in a multi-year process to develop a final offshore leasing program for 2017-2022. Before the program is finalized and before any lease sales occur, the Department will consider another round of public input on the proposal and its accompanying Draft Programmatic Environmental Impact Statement (EIS). Today's proposal was informed by more than one million comments, 23 public meetings and extensive outreach with members of the public, non-profit organizations, industry, elected officials and other interested parties across the country.

“Public input is paramount to our planning process, and the proposal benefits from extensive stakeholder engagement,” said Director Hopper. “We will seek additional input from citizens, industry, other Federal and state agencies and elected officials as we develop the proposed final program.”

BOEM currently manages approximately 5,000 active OCS leases, covering more than 26 million acres – the vast majority in the Gulf of Mexico. In 2015, OCS oil and gas leases accounted for about 16 percent of domestic oil production and five percent of domestic natural gas production. This production generates billions of dollars in revenue for state and local governments and the U.S. taxpayer, while supporting hundreds of thousands of jobs.

The Proposed Program continues a tailored leasing strategy set forth in the current 2012-2017 Program that takes into account regional differences and information from each planning area.

The Proposed Program includes 10 sales in the Gulf of Mexico - one of the most productive basins in the world - where resource potential and industry interest are high, and oil and gas infrastructure is well established. The proposal continues a new approach to lease sales by proposing two annual lease sales that include all of the Western, Central, and the portion of the Eastern Gulf of Mexico not subject to the current Congressional moratorium. To provide greater flexibility for investment in the Gulf, this shifts from the traditional approach of one sale in the Western Gulf and a separate sale in the Central Gulf each year.

The Proposed Program evaluates one potential sale each in the Chukchi Sea, Beaufort Sea, and Cook Inlet planning areas, while taking comment on other options, including an alternative that includes no new leasing, as well as other measures to protect natural resources and reduce conflicts with other ocean uses, such as subsistence activities.

During the public meetings to scope the Environmental Impact Statement, several North Slope communities noted additional areas that may not be appropriate for oil and gas leasing. Using significant input and traditional knowledge from these communities, as well as other public comments and the best available science, BOEM has identified several areas where there is potential conflict between oil and gas activities and important ecological resources and subsistence activities. These areas are labeled “environmentally important areas” in the EIS and are analyzed therein. BOEM is seeking additional public input, particularly from Alaskan communities, regarding the resources and activities in those areas.

Additionally, in a Joint Statement with Canada’s Prime Minister Trudeau last week, President Obama announced principles for Arctic leadership, including a commitment to ensure that any commercial activities in the Arctic will occur only when the highest safety and environmental standards are met, including national and global climate and environmental goals, and Indigenous rights and agreements. As BOEM moves forward with offshore oil and gas planning, the agency will work with Canada to meet the world-class standard for Arctic stewardship set by the two nations.

“We know the Arctic is a unique place of critical importance to many – including Alaska Natives who rely on the ocean for subsistence,” added Jewell. “As we put together the final proposal, we want to hear from the public to help determine whether these areas are appropriate for future leasing and how we can protect environmental, cultural and subsistence resources.”

President Obama in January 2015 designated portions of the Beaufort and Chukchi Seas off limits from consideration for future oil and gas leasing in order to protect areas of critical importance to subsistence use by Alaska Natives, as well as for their unique and sensitive environmental resources. In December 2014, President Obama similarly placed the waters of Bristol Bay off limits to oil and gas development, protecting an area known for its world-class fisheries and stunning beauty.

After an extensive public input process, the sale that was proposed in the Draft Proposed Program in the Mid- and South Atlantic area has been removed from the program. Many factors were considered in the decision to remove this sale from the 2017-2022 program including: significant potential conflicts with other ocean uses such as the Department of Defense and commercial interests; current market dynamics; limited infrastructure; and opposition from many coastal communities.

“We heard from many corners that now is not the time to offer oil and gas leasing off the Atlantic coast,” added Jewell. “When you factor in conflicts with national defense, economic activities such as fishing and tourism, and opposition from many local communities, it simply doesn’t make sense to move forward with any lease sales in the coming five years.”

In conjunction with the announcement of the Proposed Program, the Department is also publishing a Draft Programmatic Environmental Impact Statement (EIS), in accordance with the National Environmental Policy Act.

Following this opportunity for public comment and environmental review, the Department will prepare a Final Programmatic EIS with the Proposed Final Program (PFP).