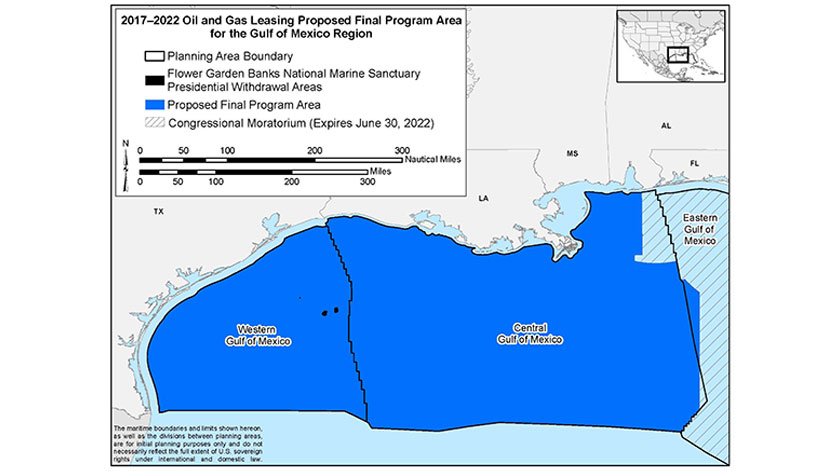 The region-wide lease sale, which is the largest in U.S. history, is scheduled for March 21, 2018, and will include all available unleased areas in federal waters of the Gulf of Mexico. In 2017, offshore leases helped the Department raise a billion dollars more in revenue for the year than was made off energy revenues in 2016.

“Responsibly developing our offshore energy resources is a major pillar of President Trump's American Energy Dominance strategy,” Deputy Secretary Bernhardt said. “A strong offshore energy program supports tens of thousands good paying jobs and provides the affordable and reliable energy we need to heat homes, fuel our cars, and power our economy. We have the strongest safety regulations in the world and today's technology is making the responsible development of our resources even safer. We look forward to this important sale and continuing to raise energy revenues, which fund efforts to help safeguard our natural areas, water resources and cultural heritage, and to provide recreation opportunities to all Americans."

Lease Sale 250, scheduled to be livestreamed from New Orleans, will be the second offshore sale under the National Outer Continental Shelf (OCS) Oil and Gas Leasing Program for 2017-2022. It will include about 14,776 unleased blocks, located from three to 231 miles offshore, in the Gulf’s Western, Central and Eastern planning areas in water depths ranging from nine to more than 11,115 feet (three to 3,400 meters). Excluded from the lease sale are blocks subject to the Congressional moratorium established by the Gulf of Mexico Energy Security Act of 2006; blocks that are adjacent to or beyond the U.S. Exclusive Economic Zone in the area known as the northern portion of the Eastern Gap; and whole blocks and partial blocks within the current boundary of the Flower Garden Banks National Marine Sanctuary.

“American energy production can be competitive, while remaining safe and environmentally sound,” said Vincent DeVito, Counselor for Energy Policy at Interior. “People need jobs, the Gulf Coast states need revenue, and Americans do not want to be dependent on foreign oil.” Money received from OCS leases (including high bids, rental payments and royalty payments) are directed to the U.S. Treasury, Gulf Coast states, the Land and Water Conservation Fund and Historic Preservation Fund.

The lease sale terms include stipulations to protect biologically sensitive resources, mitigate potential adverse effects on protected species, and avoid potential conflicts associated with oil and gas development in the region. Additionally, BOEM has included appropriate fiscal terms that take into account market conditions and ensure taxpayers receive a fair return for use of the OCS. These terms include a 12.5% royalty rate for leases in less than 200 meters of water depth, and a royalty rate of 18.75% for all other leases issued pursuant to the sale, in recognition of current hydrocarbon price conditions and the marginal nature of remaining Gulf of Mexico shallow water resources.

All terms and conditions for Gulf of Mexico Region-wide Sale 250 are detailed in the Final Notice of Sale (FNOS) information package, which is available here Copies of the FNOS maps can be requested from the Gulf of Mexico Region’s Public Information Unit at 1201 Elmwood Park Boulevard, New Orleans, LA 70123, or at 800-200-GULF (4853).