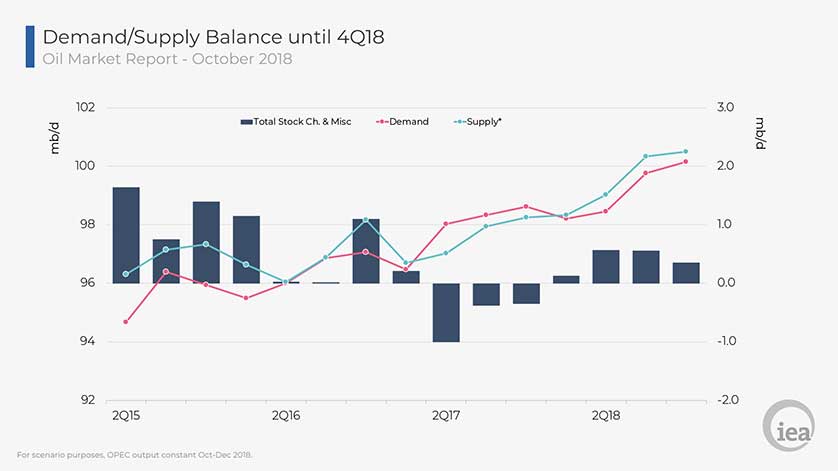 In a new study “The Future of Petrochemicals”, the International Energy Agency (IEA) points out that rising living standards, particularly in developing countries, are already underpinning strong demand growth for plastics and this will continue for many years to come.

Both global oil demand and supply are now close to new, historically significant peaks at 100 mb/d, and neither show signs of ceasing to grow any time soon. Fifteen years ago, forecasts of peak supply were all the rage, with production from non-OPEC countries supposed to have started declining by now. In fact, production has surged, led by the US shale revolution, and supported by big increases in Brazil, Canada and elsewhere. In future, a lot of potential supply could come to the market from places like Iran, Iraq, Libya, Nigeria and Venezuela, if their various challenges can be overcome. There is no peak in sight for demand either. The drivers of demand remain very powerful, with petrochemicals being a major factor.

As the oil market reaches the landmark 100 mb/d level, prices are rising steadily. Brent crude oil is now established above $80/bbl, with infrastructure constraints causing North American prices to lag somewhat. Nonetheless, our position is that expensive energy is back, with oil, gas and coal trading at multi-year highs, and it poses a threat to economic growth. For many developing countries, higher international prices coincide with currencies depreciating against the US dollar, so the threat of economic damage is more acute. The global economy is also at risk from trade disputes. In this Report, our revised demand outlook reflects these concerns: growth in both 2018 and 2019 will be 110 kb/d lower than our earlier forecast. As explained in the demand section of this Report, there is also an impact from methodological changes to Chinese estimates.

Today’s elevated oil prices partly reflect very high crude runs 100 during recent months and also supply fears as sanctions against Iran draw near. In fact, since May, when the US announced its withdrawal from the JCPOA and its decision to impose sanctions, the Vienna Agreement parties, plus Libya and Nigeria but excluding Iran, Mexico and Venezuela, have increased total oil production by a combined 1.6 mb/d. At the same time, total US supply has increased by 390 kb/d. Even China has seen the first year-on-year production growth in nearly three years in response to higher prices. Official statements from Saudi Arabia suggest that October exports are back to the high levels seen in June and that more oil is available for those who wish to buy it. Meanwhile, output in Iran, Mexico, and Venezuela has fallen by 575 kb/d. New data for OECD stocks show that in August they increased by a more- than-normal 16 mb and have been relatively stable for several months after falling significantly following the implementation of the original Vienna Agreement.

The increase in net production from key suppliers since May of approximately 1.4 mb/d, led by Saudi Arabia, and the fact that oil stocks built by 0.5 mb/d in 2Q18 and look likely to have done the same in 3Q18, lends weight to the argument that the oil market is adequately supplied for now. The IEA welcomes this boost to supply; however, with Iran’s exports likely to fall by significantly more than the 800 kb/d seen so far, and the ever-present threat of supply disruptions in Libya and a collapse in Venezuela, we cannot be complacent and the market is clearly signaling its concerns that more supply might be needed.

It is an extraordinary achievement for the global oil industry to meet the needs of a 100 mb/d market, but today, in 4Q18, we have reached new twin peaks for demand and supply by straining parts of the system to the limit. Recent production increases come at the expense of spare capacity, which is already down to only 2% of global demand, with further reductions likely to come. This strain could be with us for some time and it will likely be accompanied by higher prices, however much we regret them and their potential negative impact on the global economy.