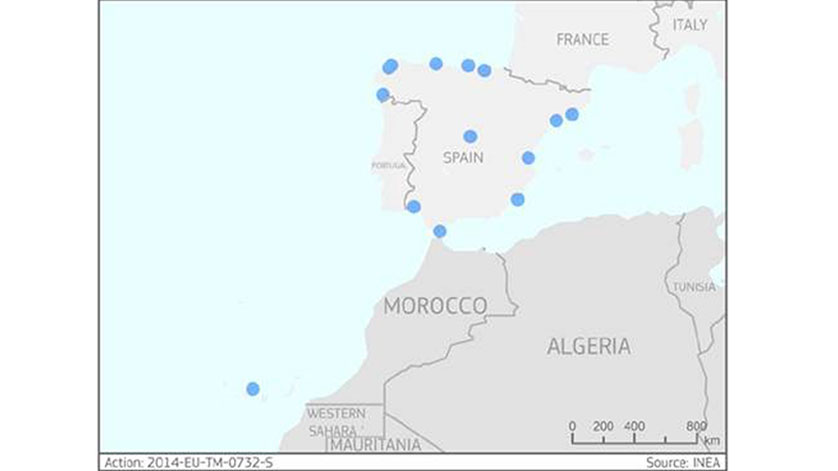 With the global fuel sulphur limit of 0.5% entering into force in 2020, the interest towards LNG as a marine fuel is increasing. One of the main obstacles to the accelerated uptake of LNG, however, is the uncertainty regarding future market volumes for LNG. DNV GL has addressed this issue in a recent market study on the future LNG market in the Iberian Peninsula, as part of driving the development of an EU-wide network of LNG refueling points.

DNV GL conducted the market study on behalf of the six-year CORE LNGas hive project1, which aims to provide an investment plan for LNG fueling in Spain and Portugal. The 33 million Euro project is coordinated by Enagas, and co-funded by the European Commission.

The DNV GL market study has forecasted the potential future demand for LNG as a ship fuel and the required future infrastructure for the areas around Spain and Portugal, covering the Mediterranean, Atlantic and Gibraltar Strait peripherical regions. The results of DNV GL’s analyses have now contributed to the CORE LNGas Hive project’s recommendations for the development of the LNG supply chain infrastructure, involving over 40 ports in the project area.

Fernando Impuesto, CORE LNGas hive project coordinator from Enagas, says: “The consortium partners selected DNV GL to execute the demand studies of the project based on the fact that DNV GL has been at the forefront of the development of LNG as a ship fuel. DNV GL’s network and market knowledge have added to a successful outcome. Through this market study we now have a strong decision basis to prepare the supply side on the Iberian Peninsula in meeting future demand for LNG bunkering at competitive conditions.”

Despite LNG fueled shipping being high on the agenda in the maritime industry, the market drivers are seen to change. From previously being encouraged by a lower price of LNG compensating for the added cost for installation of the LNG fuel equipment, results from interviews conducted by DNV GL indicate a shift towards compliance with emissions regulations to be the main motivation.

The study has revealed a huge potential for LNG as a marine fuel that will utilize the current spare capacity of the existing LNG import terminals. The consolidated quantitative results show that by 2030 up to 2 million m³/y of LNG is to be bunkered by ships (with Algeciras, Las Palmas and Barcelona as most important ports) and by 2050 approximately 8 million m³/y of LNG.

On the logistical side, the market study further concludes that existing LNG terminals will need to develop break bulk capacity to allow for loading LNG to small carriers and LNG bunker vessels. In most ports, development of local intermediate storage capacity needs to be synchronized with increasing LNG demand by larger vessels. Besides bunker stations and local storage facilities, small carriers for delivering batches of LNG to ports over sea will play an important role for the times ahead.

However, in order to realize the predicted LNG supply chain in 2030, about 1 billion Euro of capital expenditures (CAPEX) investment will be needed, adding up to a total cost of 3,7 billion Euro in 2050.

Liv Hovem, Senior Vice President, DNV GL – Oil & Gas, adds: “DNV GL’s market study has clearly shown the major potential LNG has as a fuel in the region. We hope that the conclusions from our study will help ship owners, natural gas suppliers, bunker companies, port authorities and LNG terminal operators gain the confidence they need to move forward with LNG as a fuel for a more sustainable shipping industry.”

1. The six-year CORE LNGas hive project is co-funded by the European Commission and is scheduled for completion by December 2020. The CORE LNGas Hive project is to provide recommendations to the National Policy Framework (NPF) with regard to the demand for LNG as a maritime fuel in Spain and Portugal on the deployment of alternative fuels infrastructure. It also aims to provide an investment plan for scaling associated project results. See website for more information.