How Offshore Wind Could Look by 2050 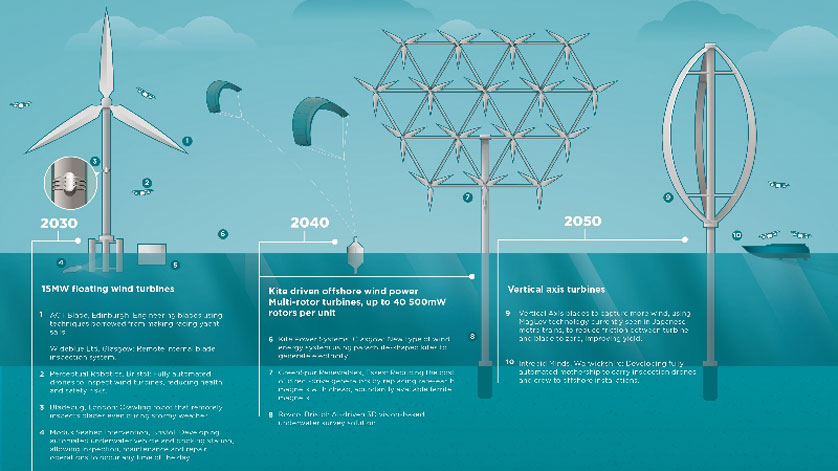 An explosion of innovation in the UK will see an army of autonomous robots service giant wind turbines with tens of rotors, while parachute-shaped kites will transform how we think about wind turbines.

And offshore wind could become the backbone of the country’s energy mix within 12 years, with pioneering designs and storage technology potentially seeing a third of the UK’s electricity demand met by offshore wind.

These predictions are based on work currently underway at the Offshore Renewable Energy (ORE) Catapult. Based on the Catapult’s current research and design taking place in the UK, the Catapult concept for the future shows how the wind farms of 2030, 2040 and 2050 will differ from today – underlining the technology behind them.

Dr Stephen Wyatt, Research and Innovation Director at ORE Catapult, said: “Our projection is based on research taking place in the UK right now – and importantly gaining traction across the world as exciting new approaches to generating clean, abundant energy from offshore wind start to emerge.

“This is a very exciting time for the offshore wind industry. In line with the UK Government’s Industrial and Clean Growth Strategies, the industry is currently working with Government to agree a transformational Sector Deal to enable additional capacity to deliver affordable electricity, grow innovative UK businesses and create UK jobs.

“Technical capability has come on leaps and bounds in recent years and if we look back 12 years to 2006, very few people would have foreseen how far we’ve come with turbine technology and storage, for example.

“Whatever the future holds, the work taking place right here in the UK will have a pivotal impact not just on how we generate energy, but on how we view offshore renewables.” 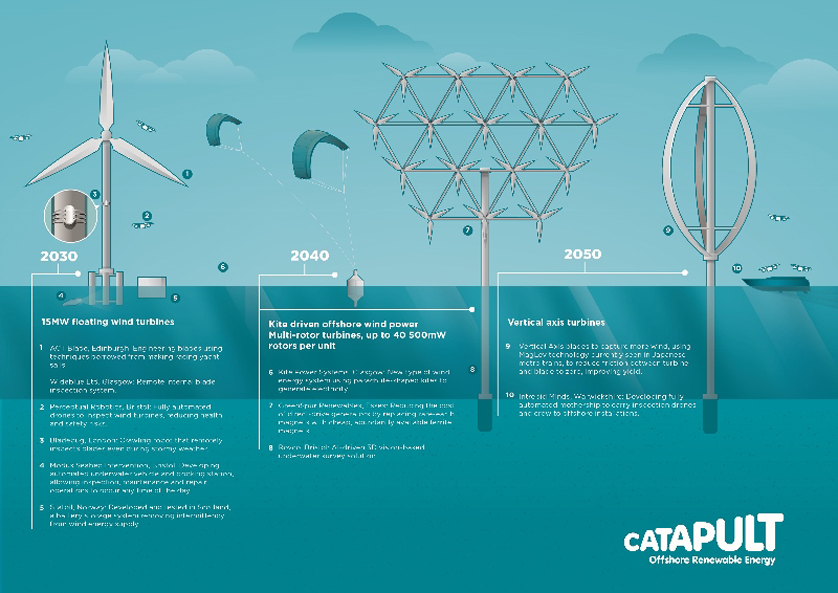 Trends we’re likely to see growing over the next two to three decades include robots and drones, with automated motherships carrying armies of droids to hazardous offshore locations, where they will carry out maintenance and basic repairs cheaper than ever before.

Turbines will become bigger, but challenges faced by scale and weight will mean more innovative designs will come to the fore, including multi-rotor designs and vertical axis turbines.

Issues faced by intermittency will also be a thing of the past, with energy storage technology maturing within 12 years to become a key part of the UK’s energy mix – potentially responsible for meeting a third of the UK’s electricity demand.

Stephen added: “While we will see an increase in automation and robotics, this new wave of offshore technology will in fact create jobs, with engineers and programmers required to create, maintain and operate these devices. Offshore crew transfers will still be a vital part of operations, as more complex tasks are unlikely to ever be fully possible using robotic technology.

“What we cannot predict is the disruptive innovations that could drastically alter the course of offshore wind development, but our world-leading representative testing and demonstration facilities mean these innovators have no better place in the world to bring forward these innovations than in the UK.”

Using some of the most innovative technologies under development as examples, how will the wind farm of the future develop?

ORE Catapult predicts that by 2030, floating wind farms will become the norm, with significantly larger turbines generating over 15MW of energy, compared to the 7MW drivetrains today. Blades themselves will be larger, but novel materials will reduce the cost of the repairs and maintenance. ACT Blade, in Edinburgh, is leading in this field, using techniques borrowed from creating ultra-efficient sails from racing yachts to engineer textile blades.

Drones won’t be the only robots swarming over offshore turbines. Soon to be tested on real turbines at ORE Catapult’s testing facilities in Blyth, Bladebug is both the name of this London micro-SME and its innovative blade crawler. This robotic crawler could significantly reduce the cost and risk of blade maintenance activities – and can operate even when the wind is too strong for flying drones.

Storage solutions being developed in the UK, such as Statoil’s BatWind technology will end intermittency issues inherent with existing wind power technology and ensure every ounce of renewable energy harnessed from the wind is used.

By 2040, turbines will be accompanied with a new type of technology. There will be extensive roll out of a floating kite power generator, such as that being developed by KPS (Kite Power Systems Ltd) in Glasgow, which uses a wing as a kite to harness power in a wider swept area than turbines can. Because the kites are lightweight, the systems use less material than conventional wind technology so produce energy at a lower cost.

“KPS is currently developing a 500kW product that will be on the market in the early 2020s,” says Simon Heyes, KPS CEO. “Our vision has always been that this technology will have a significant impact on global deepwater wind at utility scale”.

Turbines will take on a new look, with designs moving from the single-rotor designs we see today to arrays of multiple rotors on a single structure, drastically reducing installation and maintenance costs – as well as generating up to 20MW using small 500kW turbines.

And those turbines will even benefit from even cheaper generators. Expensive rare-earth magnets will be replaced by cheap, abundantly available ferrite magnets thanks to an innovative generator developed by Essex’s GreenSpur Renewables. Robotic inspections, meanwhile, will become entirely autonomous, with advanced Artificial Intelligence making basic maintenance and repair operations cheaper than ever and Rovco expect to be offering fully autonomous unmanned survey solutions.

Wind turbines will continue to grow in size, with 200m blades being the norm in single-rotor designs. Because of their size, these blades will use an entirely new construction method, with flexible blade structures used to reduce the likelihood of breakage. Secondary rotors could start to be used on the tip of blades – where because of their high speed they will generate even more power from every gust.

Vertical axis turbines, still in their infancy, will start to address the challenges current designs pose in weight, with larger traditional blades becoming less feasible on a tower structure. These vertical axis blades will have numerous other benefits, such as being able to generate power no matter which direction the wind is blowing in.

This technology will benefit from the MagLev technology currently used for metro trains in Japan. Used in tandem with vertical axis turbines, this will reduce the friction between the turbine and the blade to zero, allowing greater yield by allowing generation with even less wind.

The rise of the robots will continue with the introduction of the Mothership. These are fully autonomous boats that can transfer crew to turbines as well as more advanced robots and drones, acting both as a charging station and data-hub. These will allow for even more complex tasks and repairs to be carried out than ever before.