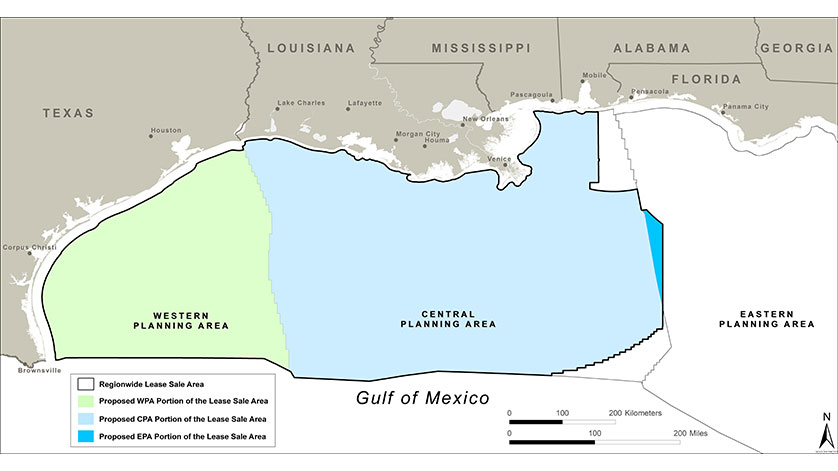 U.S. Secretary of the Interior Ryan Zinke announced on August 17, that the region-wide Gulf of Mexico lease sale generated $121,143,055 in high bids for 90 tracts covering 508,096 acres in federal waters of the Gulf of Mexico. A total of 27 companies participated in the sale, submitting 99 bids totaling $137,006,181. The sale offered the largest amount of acreage in the history of the federal offshore program in the Gulf, including parcels offshore Texas, Louisiana, Mississippi, Alabama, and Florida.

“The path to American energy dominance starts in the Gulf, and the hard work of rig and platform workers, support staff onshore, and the industries that support them cannot go unnoticed,” said Interior Secretary Ryan Zinke. “Today’s results will help secure their jobs and create more good paying jobs while generating $121 million in revenue to fund everything from conservation to infrastructure.”

Lease Sale 249, livestreamed from New Orleans, is the first offshore sale under the National Outer Continental Shelf (OCS) Oil and Gas Leasing Program for 2017-2022. Under this program, nine additional region-wide lease sales that combine all three planning areas are scheduled for the Gulf, where resource potential and industry interest are high, and oil and gas infrastructure is well established.

Lease Sale 249 offered approximately 76 million acres offshore Texas, Louisiana, Mississippi, Alabama, and Florida for oil and gas exploration and development. It included 14,220 unleased blocks, located from three to 231 miles offshore, in the Gulf’s Western, Central and Eastern planning areas in water depths ranging from nine to more than 11,115 feet (three to 3,400 meters). Excluded from the lease sale are blocks subject to the Congressional moratorium established by the Gulf of Mexico Energy Security Act of 2006; blocks that are adjacent to or beyond the U.S. Exclusive Economic Zone in the area known as the northern portion of the Eastern Gap; and whole blocks and partial blocks within the current boundary of the Flower Garden Banks National Marine Sanctuary.

"Today's lease sale is another important step in this Administration's strategy of responsible resource development and energy dominance,” said Vincent DeVito, Counselor for Energy Policy at Interior. “Investors response reflects our work of making the Department of the Interior a better business partner and optimism in the results of this Administration."

"Through regulatory streamlining, expanded offshore and onshore opportunities and great cooperation with our stakeholders, we expect to encourage competition while continuing to receive a fair and equitable return on oil and gas resources,” said Katharine MacGregor, Acting Assistant Secretary for Land and Minerals Management.

The estimated amount of resources projected to be developed as a result of the region-wide lease sale ranges from approximately 0.21 to 1.12 billion barrels of oil and 0.55 to 4.42 trillion cubic feet of gas. Most of the activity (up to 83% of future production) of the proposed lease sale is expected to occur in the Central Planning Area.

As of August 1, 2017, 15.9 million acres on the U.S. OCS are under lease for oil and gas development (2994 active leases) and 4.3 million of those acres (870 leases) are producing oil and natural gas. More than 97 percent of these leases are in the Gulf of Mexico; about 3 percent are on the OCS off California and Alaska.

All terms and conditions for Gulf of Mexico Region-wide Sale 249 were detailed in the Final Notice of Sale (FNOS) information package and available here.