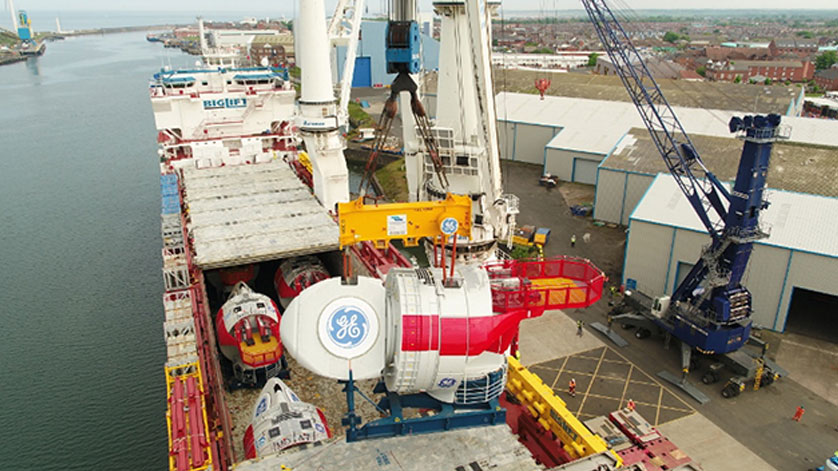 The nacelle was shipped from GE Renewable Energy’s factory in Saint-Nazaire, France, on board the vessel Happy Sky. Following the approximate 12-month test program on the Haliade 150-6MW, GE’s next generation Haliade-X 12 MW nacelle will be also delivered to Blyth for accelerated indoor testing and validation, while a full prototype unit will be installed at a yet-to-be determined site in 2019.

John Lavelle, vice-president & CEO of GE’s Offshore Wind business, said “We decided to take our Haliade 150-6MW to ORE Catapult’s site to be tested under rough and extreme conditions in a short period of time, that will allow us to collect data to be used on our recently announced Haliade-X 12 MW offshore wind turbine. We will utilize the data and learnings to enhance availability and power output, while introducing new features to meet customers’ demands.”

Commenting on the arrival of the Haliade-150, ORE Catapult Test & Validation director Tony Quinn said, “GE’s Haliade programs will be the first to use the Catapult’s 15MW drive train test facility, and the investment in this technology is paramount to bringing such world leading research and development programs to the UK, supporting a strong local supply chain and innovation to service the offshore wind industry’s ambitious growth plans.”

The arrival of the Haliade 150-6MW nacelle marks the beginning of GE’s offshore wind research and development activities in the UK, in close collaboration with ORE Catapult.

Blade for World’s Most Powerful Offshore