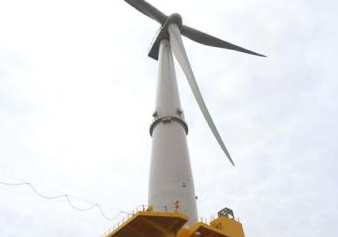 Subsea connector specialist, First Subsea, has been awarded a contract to supply a cable connector for the third phase of the Fukushima Floating Offshore Wind Farm Demonstration, offshore Japan. In this latest phase of the project, the connector will be used to connect 22kV cable to a 7MW wind turbine – the world’s largest floating wind turbine.

In Phase 3, the First Subsea cable connector will complete the connection of the subsea cable joint to the 7MW floating wind turbine.

Ease of Installation
The First Subsea cable connector has a self-activating, ball and taper mechanism allowing both diverless and ROVless deployment offshore. The male connectors are guided into receptacles on the wind turbine and substation and, once engaged, cannot be released until the load has been removed. A simple disengage mechanism allows the connector to be disconnected and recovered for re-use. The cable connection enables significant savings in vessel time, and greater installation flexibility to cope with changes in weather conditions offshore.
Focus on Renewable Energy
The Fukushima floating pilot wind farm project, which is headed up by The Ministry of Economy, Trade and Industry in Japan, will lay the foundation for the world’s largest offshore wind development off the coast of the Fukushima Prefecture.

The project is sponsored by the Ministry of Economy, Trade and Industry.