First Permanent Tidal Power Test Site in the US Approved

After several environmental studies and careful review by multiple agencies, the Marine Renewable Energy Collaborative (MRECo) has received final approval from the US Army Corps of Engineers to install the Bourne Tidal Test Site within the Cape Cod Canal. “We are very pleased the Corps of Engineers has determined that the Bourne Tidal Test Site will have no impact on the critical mission of the Cape Cod Canal and the local environment”. Said John Miller, Executive Director of the MRECo.

Funding for the test site was provided by the Seaport Economic Council. The test stand will be installed in a sheltered spot where access is exclusively via the Army Corps of Engineers’ facility (where fishing from shore is not permitted) and where it is far out of the navigational channel.

"I am pleased the US Army Corps of Engineers has approved the installation of the Bourne Tidal Test Site in the Cape Cod Canal. With investment from the Massachusetts Seaport Economic Council, MRECo is now positioned to be a national and international leader in tidal turbine research. This project is one critical component in the economic development initiatives of the Buzzards Bay area," said Third Barnstable District State Representative David T. Vieira (R- East Falmouth).

Congressman William Keating is also supportive of these efforts to develop new technologies to build upon our strong marine science and maritime technology sector to bring new jobs and enterprises to the area. “Construction of MRECo’s new tidal testing facility will continue to cement our region as a hub for marine science and technology,” said Congressman Bill Keating. “The development of tidal energy is important to securing the renewable energy needs of the future. I am happy to have been able to assist MRRCo as it went through its permitting process for this project and will continue to support them in future."

Water velocity has been measured at over 2 meters/second (4 knots) on the maximum tidal cycle in both directions, enough to turn different types of tidal turbines to test their efficiency, power output, robustness and more. Turbines of up to 3 meters can be tested with vertical lift provided for easy access. 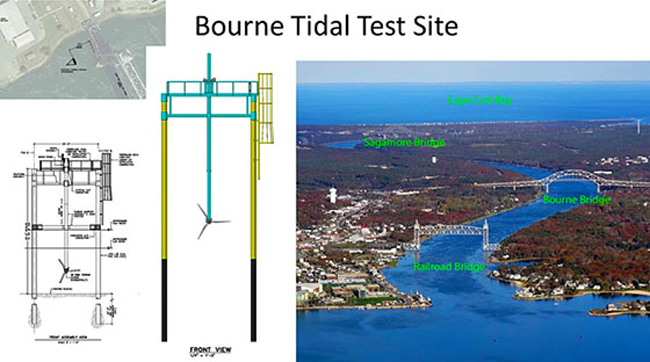 MRECo expects to install the platform in November and is accepting proposals for testing in the spring of 2018. Organizations, individuals, companies, and research institutions that would be interested in using the site for testing their own tidal energy devices and/or marine and remote sensors should contact John Miller at: director@mreconewengland.org; 508.728.5825

Seaport Economic Council is funding the development of the Bourne Tidal Test Site (BTTS) as part of Baker-Polito administration’s commitment to promote prosperity in seaport communities of all sizes as well as to cultivate job and economic growth in the maritime economic sector. The Seaport Economic Council, chaired by the Lieutenant Governor of the Commonwealth and administered by the Executive Office of Housing and Economic Development with support from the Office of Energy and Environmental Affairs, challenges the 78 coastal communities of Massachusetts to leverage their unique geographic advantages in order to grow jobs and the economy as well as prepare for the future as we confront the challenges posed by sea level rise and increasingly powerful coastal storms.