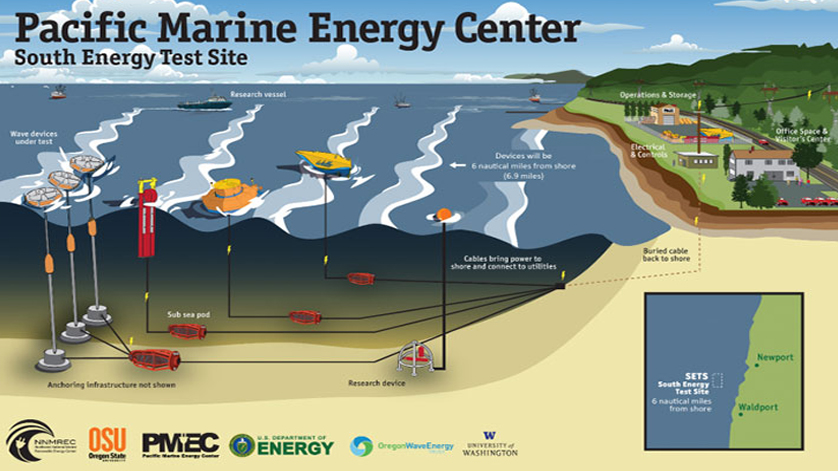 The Energy Department announced the award of up to $40 million, subject to appropriations, to design, permit, and construct an open-water, grid-connected national wave energy testing facility. The facility will be constructed in Newport, Oregon, by the Northwest National Marine Renewable Energy Center at Oregon State University and will support innovations in wave energy technologies capable of harnessing the significant wave energy resources along United States coastlines.

More than 50 percent of the U.S. population lives within 50 miles of coastlines, offering America the potential to develop a domestic wave energy industry that could help provide reliable power to coastal regions. The Department’s investments in marine and hydrokinetic energy technology will encourage domestic manufacturing, create jobs, and advance a new technology that uses an untapped renewable resource to help achieve the nation’s energy goals.

“Testing innovative wave energy devices at full scale in open water is an important step toward harnessing one day a reliable energy resource. Anyone who has swum or surfed in moderate ocean waves knows something of the power they represent,” said Franklin Orr, Under Secretary for Science and Energy at the Energy Department. “This new facility will help us to advance the science and technology of wave energy devices, and to identify the challenges we will ultimately need to overcome in order to achieve commercial deployment.”

The pre-permitted site was designed to meet the Department’s specifications as well as industry and community needs, letting researchers focus on the technological challenges inherent in testing—instead of permitting and regulatory matters. The site is expected to be a flagship test facility for wave energy converters globally, playing a critical role in advancing wave energy technology into commercial viability.

Recent studies estimate that America's technically recoverable wave energy resource ranges between approximately 900–1,230 terawatt hours (TWh) per year, distributed across the coast of Alaska, the West Coast, the East Coast, the Gulf of Mexico, Hawaii, and Puerto Rico. For context, approximately 90,000 homes can be powered by 1 TWh per year. This means that even if only a few percent of the potential is recovered, millions of homes could be powered by wave energy as the technology progresses.