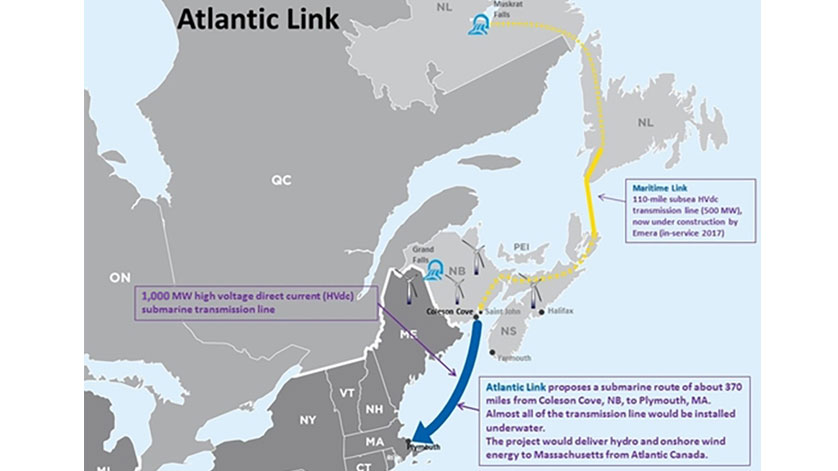 The Atlantic Link is an approximately 375-mile high-voltage direct current (HVDC) interconnection between Coleson Cove, New Brunswick and Plymouth, Massachusetts near the retiring Pilgrim nuclear station. The proposal for Atlantic Link, including the clean energy to be delivered on the transmission line, is in response to the Massachusetts Clean Energy RFP.

The proposal is being made as Emera completes construction this year of a 500 MW subsea cable between Nova Scotia and Newfoundland and Labrador.

With Atlantic Link, Emera is offering to deliver 5.69 terawatt hours (TWh) of clean energy annually, directly to Massachusetts, for a delivered price that remains fixed for 20 years.

In addition to the subsea cable, new HVDC converter facilities and substations will be constructed in Plymouth and at Coleson Cove. The project has initiated necessary permit approval processes in the United States and Canada, and is proposed to be in-service by December 2022.

Energy supply for Atlantic Link resulted from a competitive Open Solicitation process initiated by Emera in January 2017. That process was overseen by an independent administrator, Power Advisory LLC. Formal commercial arrangements are now in place between Emera and the selected wind and hydro suppliers. The project’s supply mix is over 70% wind energy from yet to be constructed wind farms in New Brunswick and Nova Scotia; with the balance being hydro, which is being provided by Nalcor Energy and NB Power.