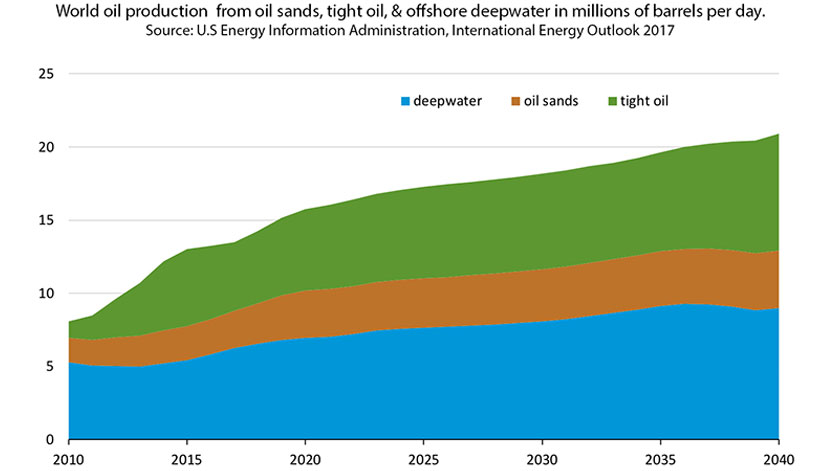 In a recent analysis of decisions to invest in the development of oil and natural gas resources, three economists from the EIA conclude that many large, capital-intensive oil and gas projects will come online after 2025 in order to meet rising demand.

According to the EIA, for deepwater, tight oil, and oil sands development, related investment is expected to be limited before 2025. These resources are typically more costly to develop, take longer to reach full production, and require additional investment in infrastructure because of remote locations. However, most projects currently under development are expected to continue.

Between 2000 and 2014, upstream investment in liquids and natural gas production increased from $139 billion in 2000 to $903 billion in 2014. Between 2011 and 2014, growing global demand and sustained crude oil prices of about $100/b supported investment in large-scale, relatively expensive projects to recover oil from less conventional sources, such as oil sands, offshore deepwater fields, and tight oil formations. Combined production from these resources increased by 44% over this period and reached 12 million barrels per day (b/d) in 2014, which was 16% of world crude production.

Following a sharp decline in crude oil prices between 2014 and 2015, companies reduced capital expenditures and deferred or canceled many capital-intensive projects. In only two years, global upstream investment declined by about 40%, from $903 billion in 2014 to $513 billion in 2016. Total investments in tight oil, oil sands, and offshore deepwater decreased from $280 billion dollars in 2014 to $126 billion dollars in 2016.

Between 2017 and 2040, production from tight oil is projected to increase by 3.3 million b/d, offshore deepwater by 2.7 million b/d, and oil sands by 1.4 million b/d. However, the timing associated with the development of these types of resources across regions differs because of rising oil prices and many other factors.

The United States and Brazil are expected to remain the most attractive countries for upstream deepwater investment, because they already host the most experienced major international oil companies in deepwater development and hold the largest deepwater oil reserves. In the IEO2017 Reference case, worldwide production from deepwater fields that are either producing now or under development is expected to reach 7.6 million b/d in 2025, and global deepwater production is projected to reach nearly 9 million b/d by 2040.