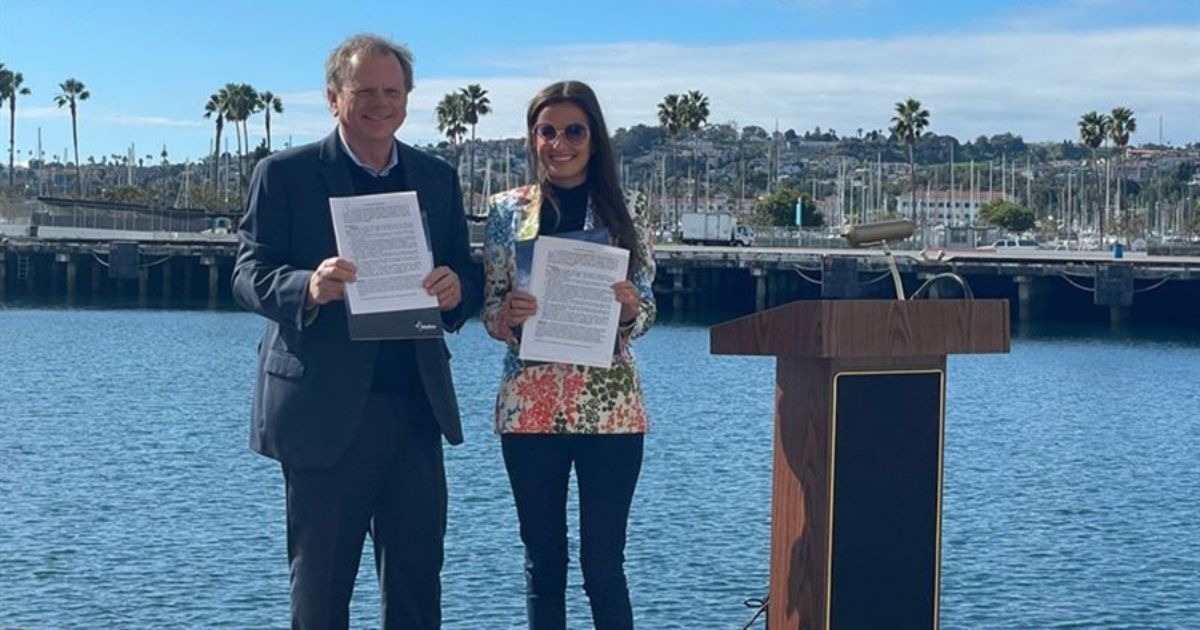 Signing Ceremony with AltaSea at the Port of LA, with Terry Tamminen, CEO of AltaSea, and Inna Braverman, CEO of Eco Wave Power

A few hours prior to Eco Wave Power’s official bell-ringing ceremony at the Nasdaq Capital Market on Thursday, Eco Wave Power Global AB, a leader in the production of clean electricity from ocean and sea waves, has announced a collaboration with AltaSea at the Port of Los Angeles (“AltaSea”).

Eco Wave Power will work with AltaSea, a nonprofit that accelerates scientific collaboration and advances an emerging blue economy, to locate and submit grants to implement Eco Wave Power’s technology. Already taking action, both organizations participated in a grant submission led by the Los Angeles Economic Development Corporation (LAEDC), which was chosen as a finalist in the Economic Development Administration (EDA) Build Back Better Regional Challenge .

In addition, Eco Wave Power plans to implement a pilot program on the AltaSea campus, located in the Port of Los Angeles. Together, Eco Wave and AltaSea will look to secure other locations for future implementation.

“The U.S. is a high priority market for Eco Wave Power,” stated Inna Braverman, founder and CEO of Eco Wave Power. “We are officially listed on Nasdaq U.S. and are looking forward to establishing a strong operational presence, including a local office and a first grid-connected wave energy project – on AltaSea’s premises in the Port of LA. We believe that AltaSea and its inspirational commitment to the blue economy can significantly assist in achieving our goals, while also advancing the U.S.’s ambitious target of cutting emissions to net zero no later than 2050.”

Eco Wave Power will also participate in AltaSea’s outreach activities, including but not limited to the AltaSea Renewable Energy Open House (scheduled for February 26, 2022) and the AltaSea Blue+Green webinar series, which allows supporters to meet and collaborate with relevant researchers, scientists, and engineers. This collaboration will also serve as an avenue to present Eco Wave Power to AltaSea audiences and receive assistance in connecting the company with American policy makers to support potential, future regulations and policies for the development of wave energy projects in the U.S.  To support this progress, Eco Wave Power will also aspire to establish an office on the AltaSea campus.

Terry Tamminen, CEO of AltaSea, commented, “We believe that Eco Wave Power aligns well with the AltaSea vision, creating a new way of using renewable energy.  We are looking forward to a productive collaboration.”

There is significant interest in renewables in the United States. It was estimated that renewable energy made up to 57% of new capacity additions in the U.S. during the first half of 2020. However, the U.S. is also the second largest emitter of greenhouse gas emissions in the world. Wave energy’s potential in the U.S. is estimated at 3500 TW/h per year. As a result, the commercial deployment of wave energy in the United States can substantially reduce emissions from traditional polluting energy generation methods.