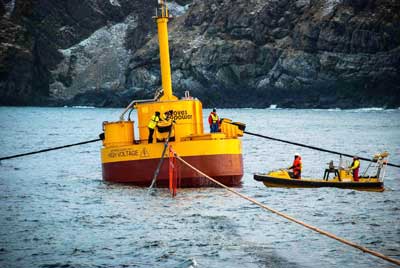 The buoy belongs to Swedish company Waves4Power. Runde Environmental Center provided the site and permits, and will handle the monitoring.

A new sea cable to shore, parallel to the existing cable, was also laid. The buoy, still in the water, has survived several storms and high waves during the past months. It will be soon be connected to the grid.

This made a case for coupling Norwegian offshore oil and gas service providers to the growing renewable ocean energy sector.

The Waves4Power system is based on years of experience and testing of wave power systems and from many years of marine service operations, resulting in a design which focuses on the SAFE concept.

WaveEL Buoy: The Heart of the System
• A buoy with a long vertical tube (the acceleration tube ) passing through it
• A water piston inside the tube connected to a power conversion system
• A mooring system allowing the buoy free vertical movement while securing it on station
• A dynamic cable connecting the WaveEL buoy to the collection hub and then via sea cable to the shore based power grid

The WaveEL buoy is a Point Absorber and as such is defined as a device with small horizontal dimensions in relation to the waves in which it is working. Due to their size point absorbers are known to survive well in the ocean as they do not fight the waves but ride them.

The device is best described as a very large pump where two masses are acting against each other. One mass is the buoy itself including the acceleration tube and the other is the mass of the water column inside the tube. Due to the difference in natural period for these masses – driven by the waves – they want to oscillate out of phase. By damping the relative movement – forcing them towards the same phase – energy can be captured by the conversion system. There are more or less sophisticated ways to establish this damping thus improving the energy output.