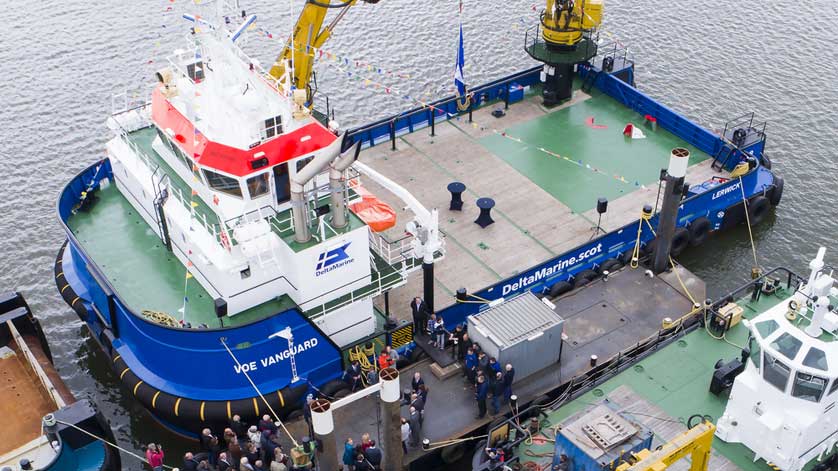 Damen has launched the Renewables Service Vessel (RSV) 3315, a new type, which has been developed in close cooperation with Scottish company Delta Marine.

The first in the new series was officially christened Voe Vanguard at Damen Shipyards Hardinxveld by Miss Akira Mary Lumsden, the granddaughter of Bob Spanswick, Managing Director of Delta Marine Ltd. Just a week later Voe Vanguard was off to her first offshore wind farm, the Walney Extension project.

Delta Marine took delivery of its first Damen vessel 12 years ago and the Shetland-based company now has four Damen Multicat vessels in its fleet, as well as one it manages.

David McNaugthan, Delta Marine General Manager, says the decision to invest in a vessel specifically tailored for renewables was taken around four years ago. “We knew at Damen we get a good project and good quality backup.” 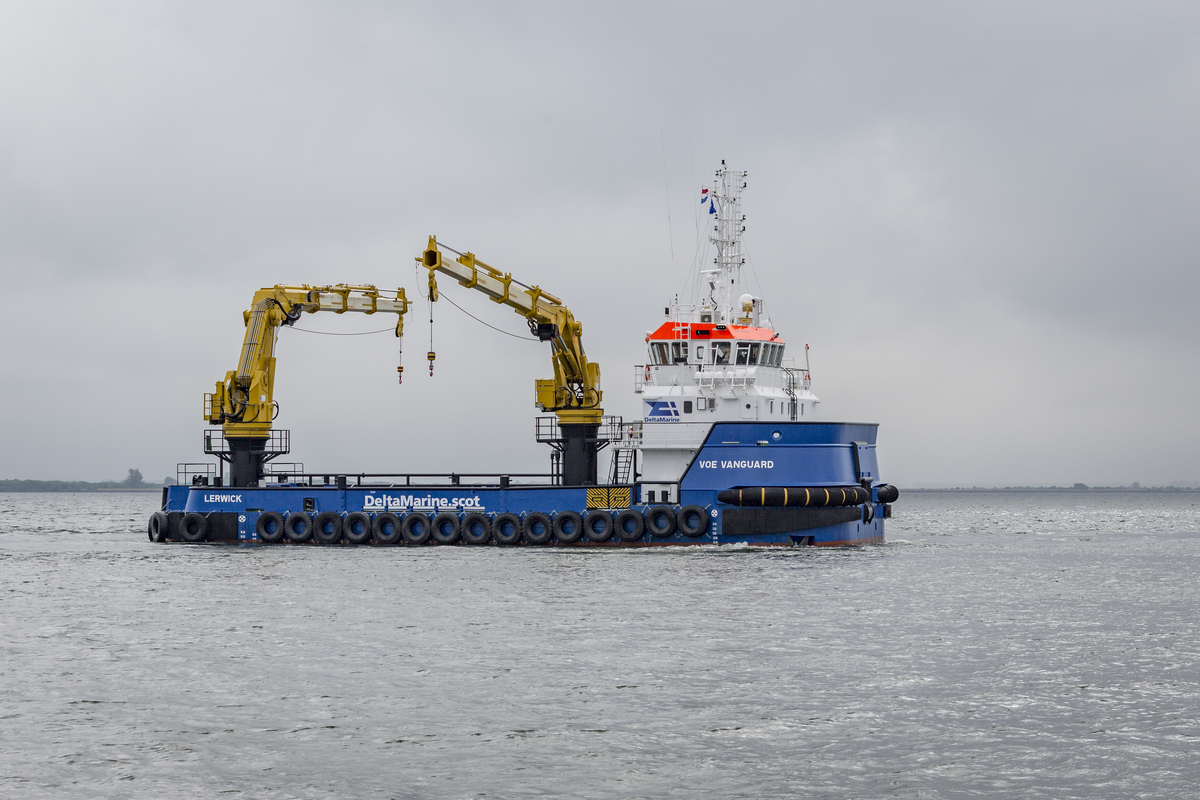 The Damen RSV 3315 is based on the highly successful Multicat design. The vessel can undertake all duties normally expected of a Multicat but has the addition of a spacious, unobstructed deck, DP2 and dedicated 4-point mooring. The 33 meter vessel has a 42-tonne bollard pull. “We were particularly interested in having a DP2 capability. This vessel is suitable for offshore wind but also for tidal projects, where she can stay in position using her DP in some pretty strong currents.”

Delta Marine and Damen adapted the traditional Multicat design by moving the wheelhouse forward and leaving the aft deck open. Additionally, it was important to make sure the vessel was under the 500-tonne mark to keep the costs down.

“The vessel is diesel electric, and has four azimuths, with a large stern thruster. She is also very flexible, with a shallow draught of only 2.6 m. The two aft azimuths can swing up into the hull and we can easily switch from DP1 to DP2 mode,” Mr. McNaugthan points out.

In addition, Voe Vanguard has two powerful cranes, one of which has a capacity of 15 tonnes with an outreach of 20 meters. “With these we can carry and lift an awful lot for a wide variety of tasks.” She also has comfortable accommodation for up to 18 crew.

Mr. McNaugthan outlines the potential of the Damen RSV 3315. “The DP2 system is very important for our clients, every single job is crying out for DP2. We are confident this new type will establish itself in the market.”

Voe Vanguard went off to work straight away for the Walney wind farm extension and then she will be exhibited at the Seawork in Southampton. After that it is straight back up the coast for another project. “We already have work into August and beyond!”

Jos van Woerkum, Managing Director of Damen Shipyards Hardinxveld, comments, “We have been working on this vessel together since 2013. Delta Marine gave us a sketch and outlined their requirements and I think Damen has built exactly what they wanted. I always say we can do a lot if we do it together! I think the Renewables Service Vessel 3315 has the potential to be the next success for Damen once she proves herself in the market.”