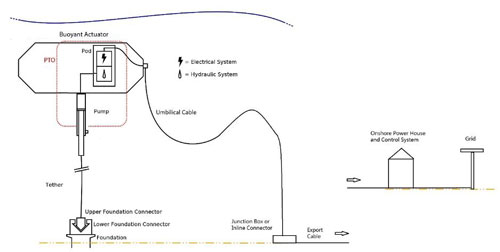 The CETO 6 concept design is the culmination of work commenced in 2012 and incorporates lessons learnt from the Perth Wave Energy Project, recent wave tank testing in Scotland, internal design and modeling studies and design work undertaken with Carnegie’s supply chain. 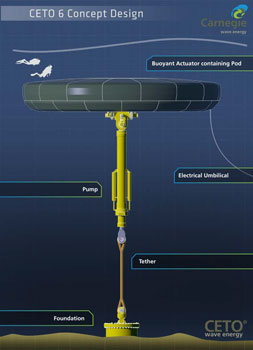 The system locates the power generation (power take off or PTO) inside a contained vessel (Pod) inside the Buoyant Actuator (BA). Locating the PTO inside the Buoyant Actuator allows more advanced control increasing system efficiency. The use of an electrical export cable (or umbilical) to deliver the power onshore also reduces transmission losses when compared to the use of a pipeline with high pressure fluid as used in the Perth Wave Energy Project’s CETO 5 technology generation. The incorporation of the power generation equipment offshore also increases the market for CETO as it can take advantage of deeper, more distant to shore wave resources and sites.

The wave tank testing of scale CETO 6 models at FloWave in Edinburgh, United Kingdom formed an important part of the overall concept design as these tests, along with PWEP results, confirmed that the targeted 1MW nominal unit capacity was achievable.

The offshore geophysical survey activities for the Project are now complete, with a preferred Project site having been identified some 10km offshore from Garden Island. The geophysical survey results, along with the concept design results, feed directly into the detailed design of the Project. Detailed design is targeted for completion in mid-2016.

The CETO 6 design is the CETO product platform that will be used subsequently in commercial CETO projects. Initially these commercial projects are likely to be in locations where conditions are most supportive of early commercial project delivery such as in the UK and Europe where there are dedicated sites, infrastructure, supply chain and feed in tariffs already in place for wave energy.

The CETO 6 unit has a targeted 1MW (1000kW) power capacity, some four times of the current CETO 5 generation being used in the Perth Project. It will have a superior efficiency, lower capital and maintenance costs than any CETO product generation developed to date. The CETO 6 Project is supported by $11m funding from the Australian Renewable Energy Agency’s Emerging Renewables Program and a five year $20 million loan facility from the Australian Clean Energy Finance Corporation. The clean, renewable energy generated by the Project will be sold to the Australian Department of Defense at Australia’s largest naval base, HMAS Stirling, on Garden Island in Western Australia.

SINTEF’s Updated Handbook on Design and

MacArtney to Develop an Automated Techni

Leading Guidelines for Design of Suction

Bourbon Partners with PEUGEOT to Design