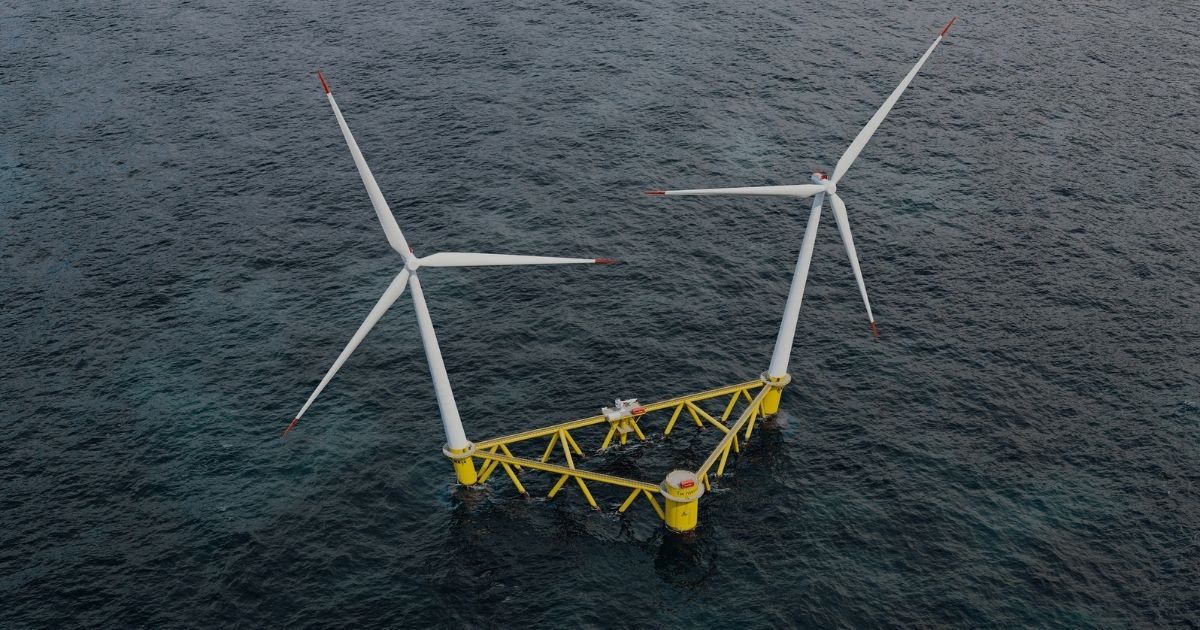 The company tasked with leading the development of floating offshore wind energy in the seas around Cornwall is to be known as Celtic Sea Power.

Hexicon will use the Wave Hub site and infrastructure off Cornwall’s north coast for TwinHub, a 30-40MW floating offshore wind project using its innovative twin-turbine platform.

Celtic Sea Power recently hosted a floating offshore wind energy conference in Falmouth to coincide with the G7 Summit of world leaders. More than 300 delegates, most attending online, heard about the potential for floating wind to play a significant part in the fight against climate change and why Cornwall and the South West can lead the way in the UK.

Steve Jermy, Chair and Interim Chief Executive of Celtic Sea Power said: “We need to rapidly accelerate the deployment of floating offshore wind to meet UK and global net zero carbon targets. Celtic Sea Power is driving that opportunity for our region where we have the offshore wind resource, supply chain, and emerging regulatory framework.

“We were delighted to welcome so many industry representatives from across the world to our G7 conference event. We showcased the scale of the Celtic Sea opportunity, how we intend to capture this activity to grow the economy and create jobs, and how our region is working with industry and Government to accelerate investment and delivery. This is all about scale and speed. What works in the Celtic Sea will work globally, creating huge export potential.”

Celtic Sea Power has estimated that over 70% of the UK’s energy needs could be met by the energy resource in the Celtic Sea. Installing 3GW of power could create over 1,500 primary jobs and the export market for floating wind could be worth £3 billion by 2030, generating net additional GVA of £900m.

The potential for floating offshore wind in the Celtic Sea to reduce emissions and create jobs has been welcomed by UK Environment Secretary and Cornwall MP George Eustice, who addressed the recent Celtic Sea Power conference.

He said: “Recently I opened the G7 Floating Offshore Wind Conference in Falmouth which highlighted the leading role Cornwall is playing in our green recovery. By 2030, the government has committed to quadrupling the amount of offshore wind power we are producing nationally, enough to power every home and supporting up to 60,000 jobs.

“Now more than ever, we are reminded of the importance of looking after our natural environment. Projects like the Celtic Sea are a key part of our wider goal of levelling up our economy and as it develops it will bring jobs, private investment and unique expertise to our area and the Government is committed to placing the environment at the heart of national recovery as we build back better and greener from the pandemic.”

And Cherilyn Mackrory, MP for Truro and Falmouth, said: “I am huge supporter of floating offshore wind in the Celtic Sea. For me, a huge part of the G7 was about showcasing Cornwall as a centre for clean, green energy and how we can play a major part in the green industrial revolution. The Celtic Sea has great potential with significant wind resource being available to support the UK’s move to net zero as we build back better. This will require a coordinated approach from a number of ports and harbours in the region and I believe that Falmouth, as the gateway to the Atlantic, with the deepest natural port in the UK, can play a part in this. I look forward to continuing to work with key stakeholders to make this happen.”

Stephen Rushworth, Cornwall Council Cabinet Portfolio Holder for the economy, added: “Floating wind off the coast of Cornwall is an opportunity like no other in terms of its potential to generate renewable energy on an enormous scale whilst having a transformational and positive impact on local economies.  Cornwall Council is delighted to have been part of this journey by supporting the sale of the Wave Hub test site which will provide an important steppingstone for the longer-term ambition for large scale development of floating wind in the Celtic Sea, and through Celtic Sea Power we want Cornwall to take the lead to ensure we capture as much local economic benefit as we can.”

The G7 Floating Offshore Wind Conference was held in Falmouth on June 11th and a full recording of the morning and afternoon sessions can be viewed here.

Celtic Sea Power is a Cornwall Council owned company, operated on an arm’s length basis, whose purpose is to accelerate the growth of the floating offshore wind sector in Cornwall, the South West and the Celtic Sea. The company’s core expertise is in all areas of the floating offshore wind sector specifically, and offshore renewables sector generally, and in offshore project management. Celtic Sea Power also leads the Pembrokeshire Demonstration Zone project, funded by the European Regional Development Fund.

In March this year The Crown Estate announced it was working up a new leasing opportunity for 300MW of early commercial-scale floating wind projects in the Celtic Sea. This is three times larger than any rights previously awarded to floating wind in the UK and an important step towards the UK Government’s ambition to deliver 1GW of floating wind by 2030.