Celebrating a Successful First Year for the Fast Flow Facility 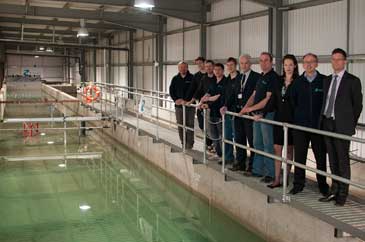 One year on from the official opening of their Fast Flow Facility, engineers and scientists at HR Wallingford are celebrating a successful first year, which has seen the facility in continuous use on offshore wind energy, tidal energy and research projects.

Officially opened on 30 October 2014, the Fast Flow Facility is a 75 m long flume uniquely designed to simulate the interaction of waves, currents and sediments at large scale and in more detail than was previously possible.

Professor Richard Whitehouse leads the team at HR Wallingford responsible for the Fast Flow Facility. He said: “It has been an incredible first year. This milestone gives us an opportunity to pause and reflect on just how successful it has been. Our goal was to develop a state-of-the art facility to help us investigate the complex interactions faced by developments in the marine environment, and we have delivered on this promise. I am proud to say that the Fast Flow Facility has been embraced by industry and academia alike, and is now rightly regarded as a world-leading simulation facility.”

Andreas Roulund, Lead Oceanographic Engineer at DONG Energy Wind Power, said: “The ability to have novel designs tested by physical modelling is crucial for development of our foundations. We can observe how the seabed responds to the foundation in the extreme conditions found in the North Sea. The new Fast Flow Facility at HR Wallingford is tailor made for this purpose.”

Professor Whitehouse added: “HR Wallingford has the most extensive commercial hydraulic modelling facilities in Europe, and this year has been the busiest for physical modelling in our 65 year history. The Fast Flow Facility has played a pivotal role in this success, and we look forward to this continuing long into the future.”

So what is next for the Fast Flow Facility? “We are in discussion with a number of commercial clients about projects, both in the marine renewable and oil and gas sectors,” explains Professor Whitehouse. “The Fast Flow Facility is also an important research tool. During 2016 we will be collaborating with partners on a major European research projects that will exploit the full capabilities of the facility.”

This includes a collaboration with University College London on URBAN WAVES to investigate the resilience of coastal defences and urban environments against tsunamis. As part of the project, HR Wallingford is developing a tsunami simulator that, once installed in the Fast Flow Facility in early 2016, will be the largest tsunami simulator in Europe.

As part of the €10 million EU-funded HYDRALAB+ project, HR Wallingford will also work with scientists and engineers from around Europe on research that will use the Fast Flow Facility to examine the impact of climate change at the coast.