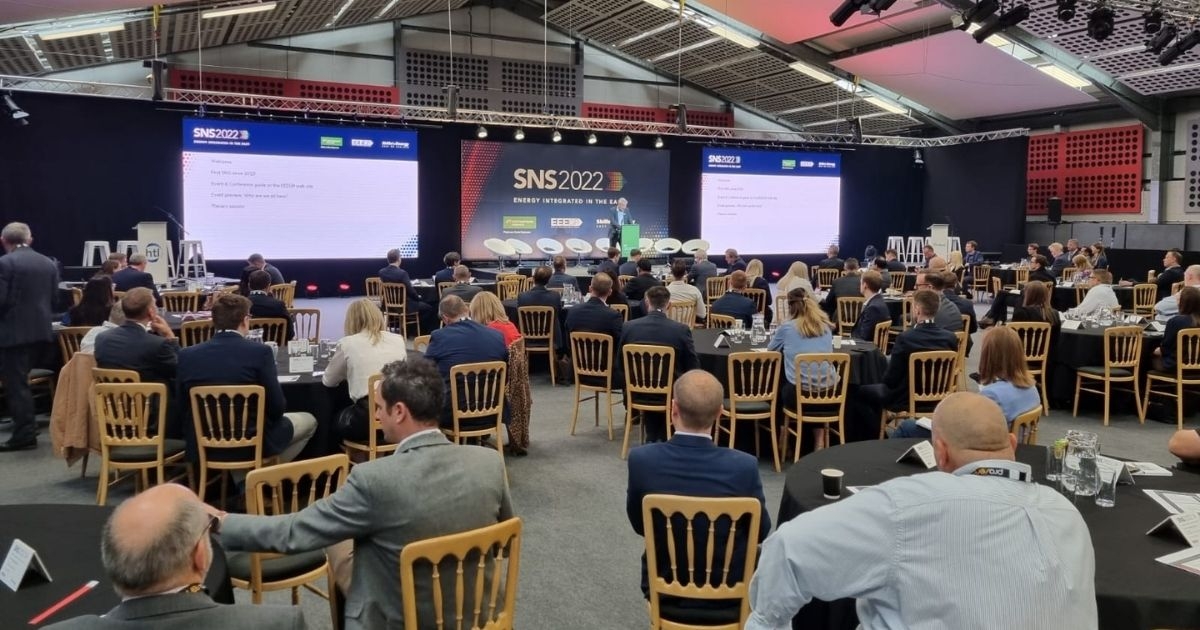 EEEGR Executive Director of Policy and External Affairs Simon Gray opens SNS 2022 Energy Integrated in the East on day one of the conference (25th May 2022) at the Norfolk Showground, Norwich. Credit: East of England Energy Group (EEEGR)

The buzz of excitement was palpable across the East of England Energy Group (EEEGR)’s flagship event, SNS 2022 Energy Integrated in the East, as a raft of delegates arrived ready to get back to ‘business as usual’ with face-to-face networking.

With almost 7GW of offshore wind having been consented in recent months, now the industry eagerly awaits a decision on Sizewell C, anticipated in the coming weeks.

And that anticipation has been felt across the event, with EEEGR Executive Chair Martin Dronfield opening the conference:

“Energy Integrated in the East is so much more than a label we have adopted for our conference. It’s a reflection of a region that has the perfect mix of energy production sources, and for that reason it is the region ideally placed to be the UK’s integrated energy exemplar.”

He named the region the energy production capital of the UK, with gas production from the Southern North Sea still accounting for around a third of the UK domestic product, as well producing over 5GW of the nation’s clean electricity.

Martin was followed by plenary speakers from developers at the heart of the region’s future development, including Charlie Jordan (ScottishPower Renewables), Danielle Lane (Vattenfall), and Tom McGarry (Sizewell C).

“There needs to be a change. We’re fighting for our future; we need to do more. The answer is we need to decarbonize, and we need to do it quickly. The solutions bring many benefits […] The opportunities are here.”

“We need innovative solutions for many projects in the region. Don’t just think locally; think globally.”

“The urgency we have discussed for years must now be acted upon. Sizewell C is the only project that can fulfil the government’s goal. An integrated system is a sustainable one.”

Throughout day one of the conference and exhibition, delegates were given the opportunity to hear more from key developers and industry thought-leaders, on topics ranging from UK government’s recent commitment to new nuclear through to how we can attract and retain talent in the east.

“Sizewell C, when built, will offset its carbon within the first 5 months. We also want to reduce carbon during construction, so we want to work with companies and suppliers who are aligned.”

“The opportunity just off the coast for us is bigger than it’s ever been. Each GW is roughly £1 billion in investment. Now is the time for action.”

“We’ve historically said that the East of England could deliver at least half of the UK’s original 30GW, and potentially half of the uplifted 40GW. Our current pipeline will give us 14.8GW of installed capacity by 2030.”

"Through a collaborative industry approach, the Bacton Energy Hub will deliver a future for the region whilst achieving MER and Net Zero."

Andrew Harston was joined by Denise Hone, Senior Stakeholder & Community Engagement Manager for Vattenfall to launch East Wind, a new brand for the East of England cluster, highlighting the scale of opportunity within the region and sector.

Conference attendees also heard updates on the East of England projects, where it was revealed that high levels of innovation are currently happening in the region, driving forward the local supply chain with exciting opportunities head.

This included the news that, once complete, ScottishPower Renewables’ East Anglia Hub will assist in delivering 6% of UK government’s 50GW by 2050 target, bringing £6 billion of investment to the UK and powering up to 2.7 million homes.

Swedish developer Vattenfall revealed that survey works on their Norfolk Zone have begun following granted consent earlier this year. Offshore installation is set to start in 2026, with first power planned in early 2027.

And RWE announced that, if built, their Five Estuaries project will feature up to 79 turbines across 2 separate seabed, with expected capital investment of around £1.5 billion and the potential to power up to 380,000 average UK households.

As the conference and exhibition drew to a close, it was clear that the East of England really has become the UK's integrated energy exemplar.