On September 22, 2016, the Bourne Tidal Test Site is now a bit closer to reality. The Marine Renewable Energy Collaborative (MRECo) was notified by the Federal Energy Regulatory Commission (FERC) that it has been approved for a preliminary permit to set up a test site for tidal energy in the Cape Cod Canal.

As MRECo Director John Miller stated, “This is the first and very important step to gaining all the regulatory permits required for the test site, which will be the first in the United States. MRECo was given preliminary permission to work in an area that covers more than just the spot where the actual structure will be. This was done to allow studies of adjacent areas that might be impacted. 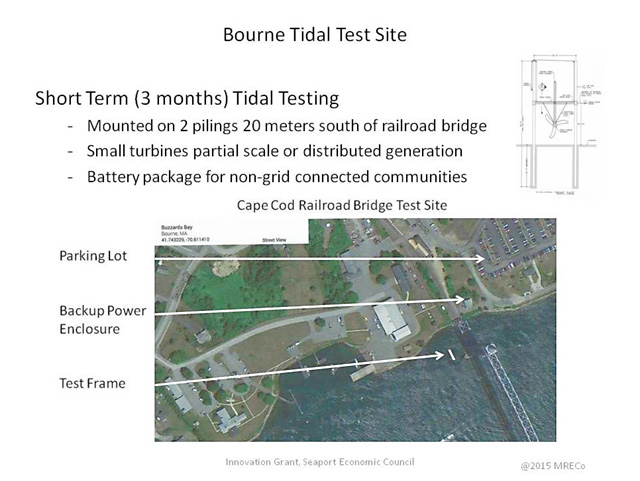 The Massachusetts Maritime Academy is also moving forward with tidal energy projects to support green energy training for their students. MRECo and the academy continue to discuss their efforts in order to ensure maximum synergy. The President of Massachusetts Maritime, Rear Admiral Francis X. McDonald, noted that, “the tie-ins to what the Academy does both in and outside of the classroom are very exciting and we look forward to working with the Marine Renewable Energy Collaborative to learn about tidal power prospects for Massachusetts and beyond”.

The Bourne Tidal Test Site is intended to facilitate the growth of a tidal energy industry in Massachusetts and is funded by the Massachusetts Seaport Economic Council. Representative David Vieira stressed the potential economic benefits of this new industry and the connections that can be made with local marine technology firms, local fabricators, and the many educational institutions in the region that are already training the clean energy workforce.

"I am pleased with the progress of the hydrokinetic tidal test site in the Cape Cod Canal. Not only is this an important step to advance the research & development of new technology, but the site has the potential to contribute to the economic development initiatives in Buzzards Bay. I want to thank the Seaport Economic Council, under the chairmanship of Lt. Governor Polito, for funding this project. Thanks also to the Marine Renewable Energy Collaborative of New England, the Bourne Board of Selectmen, the Bourne Financial Development Corporation, and the Cape Cod Canal Region Chamber of Commerce for their support. I am proud to be part of this innovative step forward in responsible, renewable energy research & development," said Representative David T. Vieira (R-East Falmouth).

MRECo will now move forward with additional environmental studies as required by the various town, state and federal agencies. Once complete, MRECo can begin the installation process, testing and evaluation of the www.mreconewengland.org.