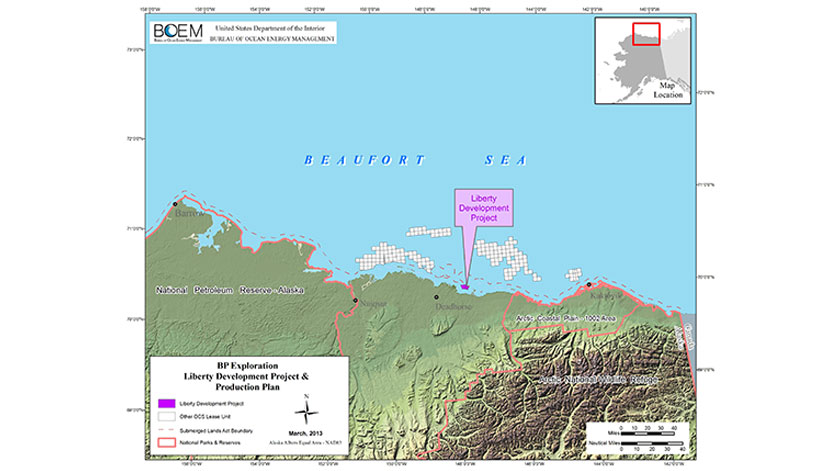 The Bureau of Ocean Energy Management (BOEM) has announced a draft Environmental Impact Statement (EIS) analyzing the possible environmental impacts of the activities proposed in an offshore oil and gas development and production plan (DPP) submitted to BOEM by Hilcorp Alaska LLC. on Sept. 18, 2015.

The publication of the draft EIS opens a 90-day public comment period, which extends through 11:59 p.m. Eastern Time on Nov. 18. During this time, BOEM will conduct public hearings and accept comments. The input received via this process will be used to inform preparation of the final EIS.

"Today's publication of the draft EIS is another important step in the Department's strategy of responsible resource development and we are committed to working with states, Alaska Native communities, investors and all stakeholders when we analyze development and production plans," said Vincent DeVito, Counselor for Energy Policy at Interior.

In its DPP, Hilcorp proposes to build a small artificial gravel island in the shallow (19 feet) federal waters of the Beaufort Sea, about 20 miles east of Prudhoe Bay. To be located about five miles off the coast in Foggy Island Bay, the 9-acre site would be similar in nature to the four oil- and gas-producing artificial islands currently operating in the area’s state waters (Spy Island, Northstar Island, Endicott Island, and Oooguruk Island).

Hilcorp plans to install a “pipe-in-pipe” subsea pipeline to deliver oil to shore. The offshore portion of the pipeline will be laid in a trench, then buried. It will include automatic leak-detection and temperature-monitoring technology. Onshore the pipeline would connect with the Badami pipeline which connects with the existing oil and gas infrastructure at Prudhoe Bay.

“The federal submerged lands of the Beaufort Sea are known to have great oil and gas potential,” said BOEM Acting Director Walter Cruikshank. “They also contain sensitive marine and coastal resources that Alaska Native communities depend on for subsistence. During this comment period we look forward to discussing this draft EIS with the Beaufort Sea coastal communities and getting meaningful feedback on ways it can be refined and enhanced.”

A DPP describes development and production activities proposed by an operator for a lease or group of leases. The description includes the timing of these activities, information concerning drilling methods, the location of each proposed well or production platform or other structure, and an analysis of both offshore and onshore impacts that may occur as a result of the plan's implementation.

In its project design, Hilcorp included numerous measures to mitigate potential impacts and the company will also be required to comply with all stipulations associated with their three federal leases. The mitigation measures that the federal government will require of Hilcorp will be determined during the NEPA review process and Endangered Species Act consultations, resulting in Biological Opinions, Marine Mammal Protection Act authorizations, and other permits that must be obtained from the Federal regulatory agencies.

Hilcorp’s DPP commits the company to several actions to minimize disruption to subsistence activities – including whaling – that play a vital role in the lives and cultures of Alaska Native communities along the Arctic coast, and BOEM continues to be committed to protecting this unique way of life. For example, potentially noisy activities will be scheduled to avoid the spring and fall whale migration periods, and flight activities will be arranged to avoid hunting areas. Significantly, Hilcorp has committed to signing a Conflict Avoidance Agreement with local whaling groups to engage with the whalers to protect subsistence activities.