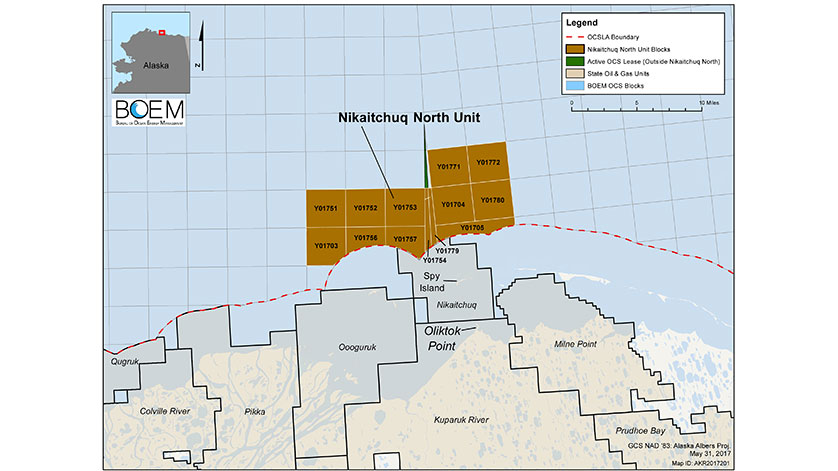 After a comprehensive review and consideration of comments received from the public, stakeholders, and Federal and state partner agencies and tribes, the Bureau of Ocean Energy Management has conditionally approved a Beaufort Sea exploration plan (EP) it received from Eni US Operating Co. Inc.

Eni US is a subsidiary of Italian multinational oil and gas company Eni S.p.A. In its plan, Eni describes its intent to drill four exploration wells into the federal submerged lands of the Beaufort Sea from its Spy Island Drillsite, a pre-existing facility located in Alaska state waters. Drilling will be conducted during the winter months only. The drilling is scheduled to begin in December 2017.

Over the past 30 days BOEM has been carefully evaluating the EP in accordance with federal law and regulations. This evaluation included a site-specific Environmental Assessment (EA) of the proposed exploration activities pursuant to the National Environmental Policy Act. The EA concluded with a Finding of No Significant Impact (FONSI).

“Eni brought to us a solid, well-considered plan,” said BOEM’s acting director, Walter Cruickshank. “We know there are vast oil and gas resources under the Beaufort Sea, and we look forward to working with Eni in their efforts to tap into this energy potential.”

The evaluation also included two separate public comment periods: one to give the public the opportunity to provide information on issues that should be examined in the Environmental Assessment; and one to comment on the EP itself. This input was carefully considered throughout the process.

“I’d like to thank our Alaska Native stakeholder organizations, environmental groups, members of industry and everyone else who took the time to submit substantive comments,” said James Kendall, director of BOEM’s Alaska OCS Region. “Our staff worked very diligently to analyze every one we received, and incorporate that input into our review.”

The EP and supporting documents, and links for viewing the public comments, are available here.

An EP describes all exploration activities planned by the operator for a specific lease or leases, including the timing of these activities, information concerning drilling processes, the surface location of each planned well, and actions to be taken to meet important safety and environmental standards and to protect access to subsistence resources. An EP does not allow an operator to produce oil if any is found; for that, an operator is required to obtain approval of a Development and Production Plan (DPP).

Among the conditions of approval is the requirement that Eni must also procure all appropriate permits from other state and federal agencies, including permits to drill from the Bureau of Safety and Environmental Enforcement. A list of the permits Eni intends to apply for is located in Table A-1 of the EP. A full list of conditions of approval can be found in the approval letter at the link above.

Spy Island is one of four oil- and gas-producing artificial islands in the waters of the Beaufort Sea. The others are Northstar Island, Endicott Island, and Oooguruk Island. The construction of a fifth island, as proposed in a DPP submitted to BOEM by Hilcorp Alaska LLC, is under review by federal agencies.