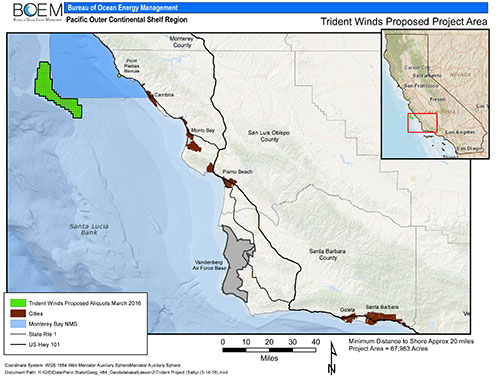 “This announcement represents a significant step in facilitating the responsible development of offshore renewable energy to help California meet its energy needs,” said BOEM Director Abigail Ross Hopper. “We are working closely with the State of California, industry and a broad range of stakeholders to ensure that planning for future commercial wind leasing is done in a transparent manner that engages stakeholders throughout the process.”

In consultation with the State of California, BOEM has determined Trident Winds LLC is qualified to hold an Outer Continental Shelf lease and now must determine whether it is appropriate to issue the company a lease on a non-competitive basis, or whether a competitive process is required. The proposed project would consist of 100 floating foundations, each supporting a wind turbine generating 7-8 megawatts of energy. A single transmission cable would bring the electricity to shore. The proposed lease area, about 33 nautical miles northwest of Morro Bay, covers 67,963 acres of federal lands in water depths of 2,600‐3,300 feet.

“This is a compelling opportunity that would assist California in meeting its ambitious and critically important renewable energy goals,” Director Hopper noted. “We will continue our work with public and private stakeholders to create a path forward for sustainable energy development in the right places with the lowest conflicts offshore the Golden State.”

“California has shown the nation that thoughtful planning and coordination can advance sustainable energy solutions,” said Assistant Secretary for Land and Minerals Management Janice Schneider. “Under the leadership of Governor Brown and the California legislature, together we are making progress on creating the policy framework necessary to spur the development of offshore wind energy technology, helping further their goal of producing 50 percent of the State’s electricity from renewable sources by 2030.”

If there is competitive interest, BOEM will initiate the competitive leasing process. If no expressions of interest are received, BOEM will proceed with the noncompetitive leasing process. BOEM is also seeking public comment on the project proposal, its potential environmental consequences, and the use of the area in which the proposed project would be located. According to the National Renewable Energy Laboratory, areas off the U.S. west coast and Hawaii could generate 1.5 terawatts of offshore wind energy, enough to power more than 500 million homes.

BOEM will publish a Potential Commercial Leasing for Wind Power on the Outer Continental Shelf (OCS) Offshore California, Request for Interest in the Federal Register on August 17, 2016. The notice includes a 30-day public comment period. BOEM will accept comments in the following ways:

2. Written comments should be sent to:

BOEM received the unsolicited request for a commercial wind lease from Trident Winds, LLC on January 14, 2016. A public copy of the lease request can be viewed here.

In May, at the request of California Governor Jerry Brown, Interior Secretary Jewell announced the formation of a California Intergovernmental Renewable Energy Task Force to examine opportunities for offshore renewable energy development. The task force, a non-decisional entity, will facilitate coordination and communication in a partnership between BOEM and state, local, and tribal governments and federal agencies concerning potential renewable energy leasing for research activities and commercial development on federal submerged lands on the OCS offshore California. The first task force meeting will be held later this year.

To date, BOEM’s offshore renewable energy program has awarded 11 commercial wind energy leases off the Atlantic coast. Nine of those leases were issued as a result of competitive lease sales that generated about $16 million in winning bids for more than one million acres. Last week, the Department announced a proposed lease sale for 122,405 acres offshore North Carolina for commercial wind energy leasing, and in June, a proposal to hold a competitive lease sale for an area offshore New York later this year. In the Pacific, BOEM has received three unsolicited commercial floating wind lease requests offshore Hawaii and this one offshore California. BOEM has invested millions of dollars in ongoing environmental and technological studies designed to inform its regulatory process as offshore development proceeds.