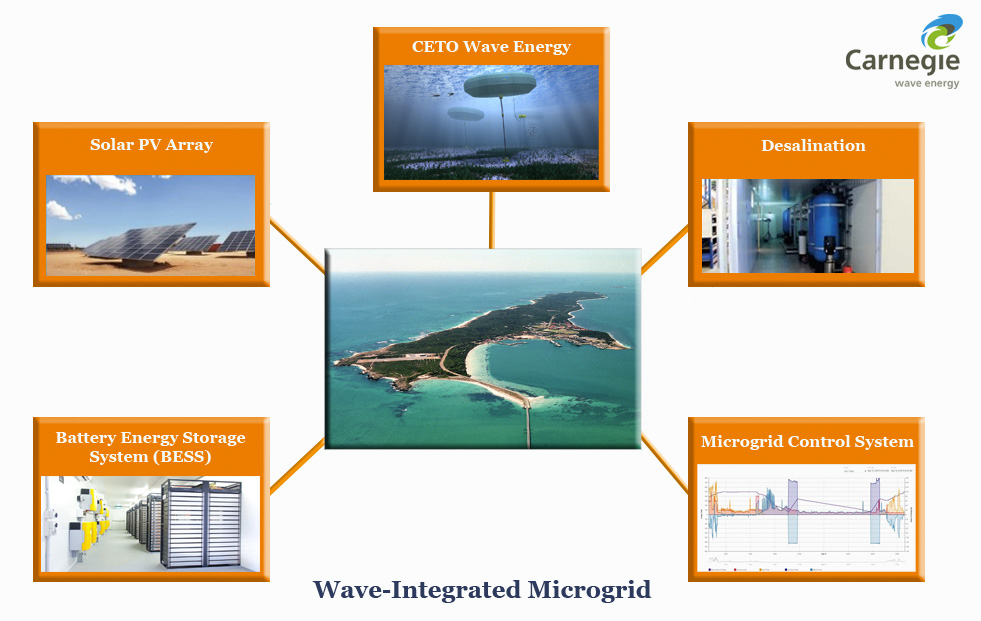 The Project will involve the construction and installation of a 2MW solar PV array, a 2MW/0.5MWh battery energy storage system and control system both to be integrated with Carnegie’s CETO 6 technology and existing desalination plant. The Project will also include augmentation of the grid connection and is supported by Western Power, the network operator who builds, maintains and operates the main electricity network in WA.

The Project will begin construction before the end of 2016 and be commissioned in the first half of 2017. Designed to operate in “on-grid” mode in parallel with the Western Australian electricity network and in “islanded” mode, isolated from the grid, this Project will act as a template for remote islands and fringe of grid communities globally.

ARENA CEO Ivor Frischknecht said, the landmark project is expected to demonstrate the viability of integrating a renewable energy based microgrid with a utility-scale distribution network.

“ARENA is excited to help local companies, like Carnegie, develop new renewable energy solutions that have the potential to change the way the world generates power.”

“The Garden Island Microgrid Project will be the first time anywhere in the world that wave energy will be combined with solar and batteries in a microgrid configuration. The demonstration of this microgrid project will help drive the commercialization of CETO and will be a model we will roll out to island nations around the world. We look forward to completing the outstanding elements of the Project including final approvals, construction award and power offtake in order to commence the Project, as soon as possible.” ARENA’s innovative funding package for the estimated $7.5m Project is comprised of a grant of $0.7 million, followed by $1.8 million of convertible note funding. The ARENA convertible notes will prima facie be unsecured debt with 0% interest over a 6 year term and can be converted by ARENA to ordinary shares in Carnegie at a conversion price of $0.053 per share. The balance of funding will be provided by Carnegie equity and a project finance facility from the Commonwealth Bank of Australia.

The award of funding is conditional upon the completion of detailed design, award of the engineering, procurement and construction (EPC) and operations and maintenance (O&M) contracts, approvals and permits, power off-take agreement and Department of Defence approval.

The Company is not aware of any reason why the ASX would not allow trading to recommence immediately.

A microgrid is a discrete energy system made up of distributed energy sources that are capable of operating independently from the main power grid.