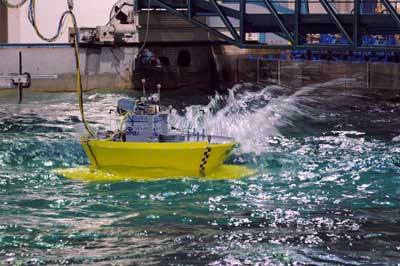 Under a program organized by the Research Partnership to Secure Energy for America (RPSEA), Doris Inc., the Offshore Technology Research Center (OTRC) at Texas A&M University and Sevan Marine have carried out further research and model scale testing of Sevan Marine’s cylindrical hull for application in GOM ultra deep water. The model tests at OTRC confirm the favorable motion characteristics of the Sevan Marine design enabling the application of with Steel Catenary Risers (SCR) and permanent mooring in even the harshest hurricane conditions. Several major oil companies attended the Industry Day held on Wednesday, May 11, 2016 further highlighting the keen interest which exists in the market for Sevan Marine’s cylindrical design.

Further research and testing is planned in order to bring Sevan Marine’s patented SCR concept to its full potential. Sevan Marine is confident that this can be a game changing technology for deep water offshore applications particularly in the U.S. Gulf of Mexico’s outer continental shelf in years to come.

Sevan Marine would like to give its special thanks to Doris Inc., the OTRC and RPSEA for their great support.

Funding for the projects is provided through the “Ultra-Deepwater and Unconventional Natural Gas and Other Petroleum Resources Research and Development Program” authorized by the Energy Policy Act of 2005. This program—funded from lease bonuses and royalties paid by industry to produce oil and gas on federal lands—is designed to assess and mitigate risk enhancing the environmental sustainability of oil and gas exploration and production activities.

RPSEA is under contract with the U.S. Department of Energy’s National Energy Technology Laboratory to administer three areas of research. RPSEA is a 501(c)(3) nonprofit consortium with more than 180 members, including 24 of the nation's premier research universities, five national laboratories, other major research institutions, large and small energy producers and energy consumers. The mission of RPSEA, headquartered in Sugar Land, Texas, is to provide a stewardship role in ensuring the focused research, development and deployment of safe and environmentally responsible technology that can effectively deliver hydrocarbons from domestic resources to the citizens of the United States. Additional information can be found here