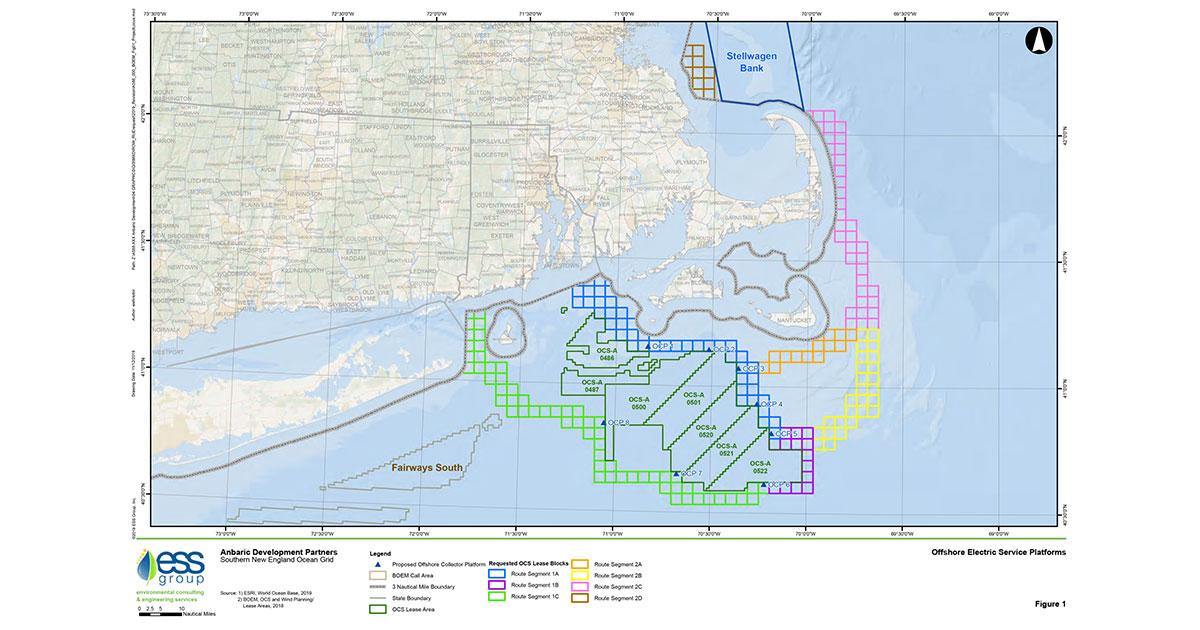 Once approved by BOEM, the transmission network on the outer continental shelf would link the existing wind lease areas via a common system and deliver that power to the on-shore grid. Benefits will include greater efficiency, more reliability, fewer environmental impacts, and the ability to direct the energy to specific areas, like Boston and/or the South Coast.

The Southern New England OceanGrid would be developed in phases and anticipates an offshore transmission network connecting up to 16,000 MW of offshore wind to Massachusetts, Rhode Island, and Connecticut. Additionally, it includes transmission line routes that connect BOEM lease areas directly into Boston, Rhode Island’s Narragansett Bay, Massachusetts’ South Coast, and Connecticut to provide offshore wind-generated electricity to area residents. Built out over a period of 20 years, the Southern New England OceanGrid provides the infrastructure for a clean energy resource that will replace fossil fuels as the foundation of New England’s electric system.

“As offshore wind’s potential gains momentum, it’s time to think big and plan rationally. It becomes clearer every day that transmission must lead the way towards greater scale, reliability and efficiency, just as it has in Europe. Individual wind farm developers have gotten the industry off to a good start, but we now need a networked grid to minimize conflict and create a truly reliable offshore transmission system that will substantially de-risk wind projects,” said Edward N. Krapels, CEO of Anbaric.

Anbaric’s BOEM filing underscores the potential environmental benefits of building an open-access, independent transmission system. “Anbaric’s Southern New England OceanGrid offers the advantage of reducing the overall footprint and potential environmental and socio-economic impacts of transmission infrastructure. The fishing industry that has been working these waters for hundreds of years is one use that will benefit from rationally planned and implemented transmission,” said Krapels.

Anbaric’s application to BOEM lays out the minimum number of offshore collector platforms (OCPs) and associated transmission corridors to efficiently obtain the maximum amount of clean power from BOEM lease areas off the southern coast of New England.

Anbaric submitted the application to BOEM on November 18 and requested that the federal agency post the application in the Federal Register for public comment no later than January 1st, 2020. Once posted, there will be a 30-day public comment period during which others may indicate that they have a competitive interest. It is also an opportunity for comments on environmental, fishing, historic and cultural resource, tribal, and economic impacts.

Anbaric currently has an application with BOEM for a New York/New Jersey OceanGrid which remains under review. For more information about Anbaric, click here.