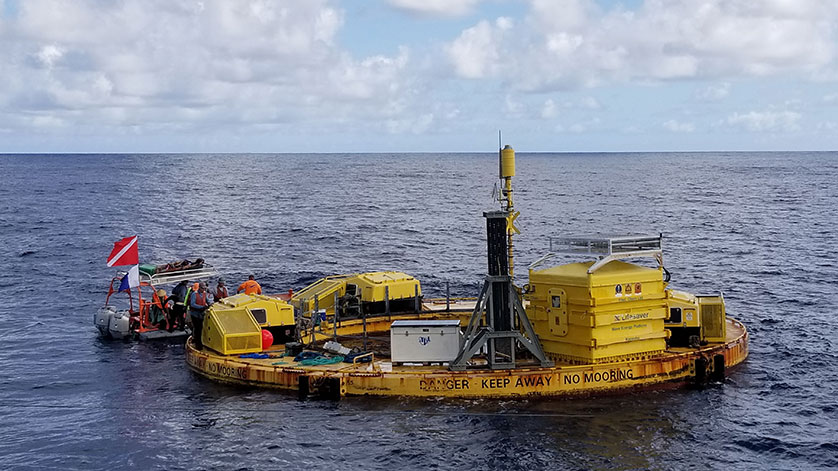 In October 2018, the Applied Research Laboratory (ARL) at the University of Hawaii, with funding from NAVFAC, and in partnership with the University of Washington, Fred. Olsen, Ltd., and Sea Engineering, Inc., began the second round of testing of the Fred. Olsen (of Norway) “BOLT Lifesaver” WEC device.

The device uses three power take‐off (PTO) units that convert the motion of the passing waves to electrical power by way of rotary electrical generators. Control and health‐monitoring of these on‐board systems is housed in the Control Center. The WEC is not connected to shore and the power generated is stored in a battery bank.

This phase of Lifesaver testing at WETS has two primary aims; first, to improve device reliability and power performance, through alterations to the device mooring strategy, and second, to demonstrate an alternative means of powering oceanographic instrumentation without using utility‐supplied electrical grid power or single‐use batteries.

The instrumentation, known as the Wave‐powered Adaptable Monitoring Package (WAMP), is being tested on BOLT Lifesaver and was designed, assembled, and integrated with the WEC by the Pacific Marine Energy Center (PMEC), University of Washington, leveraging the capabilities of the Applied Physics Laboratory (a U.S. Navy University Affiliated Research Center) and the department of Mechanical Engineering.

Receiving its power from the Lifesaver, the WAMP provides persistent underwater sensing, and supports unmanned, undersea vehicle (UUV) recharge using a wireless power transfer system developed by Seattle startup Wibotic, Inc. The WAMP is the latest in a series of demonstrations of the core AMP technology and is being used in this application to better understand the marine environment around an operational WEC buoy.

The joint Lifesaver‐WAMP test is funded by NAVFAC, the U.S. Department of Energy (DOE), and the National Science Foundation; the overall effort is part of a larger joint U.S. Navy, DOE, academic (University of Hawaii, Hawaii Natural Energy Institute, and University of Washington PMEC), and industry research, development, test, and evaluation (RDT&E) project. This is the world’s first demonstration of the potentially transformative capability for WECs to enable persistent oceanographic observation and UUV re‐charge without a cable to shore.

Testing WEC devices at WETS allows the Navy/Marine Corps to evaluate the technical and economic feasibility of various wave energy conversion configurations, which will in turn pave the way for the public/private sector’s use and benefit once these devices become mature. Device developers will use the ocean test results to further calibrate their computer model simulations, refine their system designs, mature their technologies, and then move towards system commercialization. This same protocol will hold true for all companies testing their WEC device technologies at WETS.

The WETS infrastructure is unique in the U.S. in that it offers the capability to support operational tests of WEC devices in an energetic open-water environment with a connection to the local electrical grid. It is the goal of all ocean wave energy developers to convert ocean wave energy into useable electrical power for utility- or grid-scale applications. Wherever isolated grids, remote locations, high costs of energy, and energy security are of importance, wave energy conversion may become another distributed generation option for diversifying the energy system. For more information, click here.